Investors have felt the rush of a sugar high in 2019 with positive returns in stocks and bonds. But they should position for when the sugar rush ends.

U.S. equities have posted robust returns in 2019 with the S&P 500 climbing to record highs, while major indexes across Europe have punched higher. At the same time, investor appetite for fixed income has appeared insatiable with yields on sovereign bonds sinking to multiyear lows and negative-yielding debt globally surging to a record high.

The rally in both risky assets (equities) and safe assets (bonds) suggests that investors have mixed conviction on the path forward for the economy. Which will be the ultimate victor: equities to extend the rally, or bonds to punch higher with yields sinking lower? In effect, rallying in tandem is not unusual after dovish monetary policy shifts, but we believe it is prudent to position portfolios for when the winner will emerge.

Running of the bulls 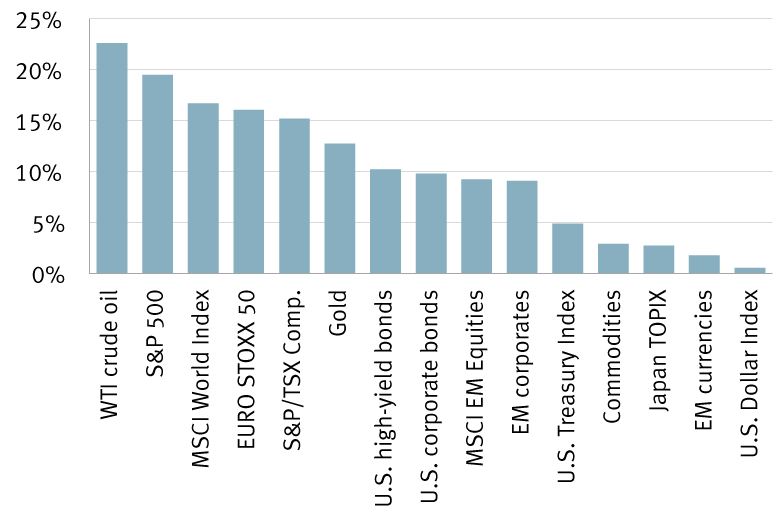 Equity markets have marched higher in 2019 on the back of a dovish dose of support coming from central banks’ willingness to extend the economic expansion. Signs of weak global growth, simmering trade tensions, and a U.S. economy nearing late-cycle have ostensibly been overshadowed by the potential for stimulus from central bankers. Rate cuts of varying magnitudes anticipated by market participants over the coming months have boosted equity valuations in an environment of relatively muted global earnings growth.

The headline signal from equity market performance suggests that the global economic expansion should persist for some time. But beneath the surface, the composition of gains points to a less sanguine outlook. Growth stocks have sharply outperformed value in recent months as investors appear willing to pay up for stocks that can deliver real or perceived secure growth despite higher valuations. Conversely, the underperformance of more economically sensitive (cyclically-oriented) stocks demonstrates increasing fears that earnings estimates could be at risk amid slowing global growth momentum.

Or seeking safety: Doom and gloom? Maybe not

The tumble in yields reflects the sharp shift in market expectations for accommodative monetary policy, but also tends to be indicative of investors seeking safety. With this drop in bond yields, the signal from bond markets appears to be that interest rates should remain low for a prolonged period of time with inflation pressures to be contained.

Investors flocking to fixed income and the apparent “doom and gloom” signal appear at odds with the headline optimism of equity markets. But much like equities, looking beneath the hood of the bond market shows less pessimism than at first glance. Warning signs associated with an economic downturn are not evident: a widening of credit spreads and a sizeable de-risking in the market remain largely absent. Instead, against a backdrop of stimulative efforts from the Fed, investors are looking for more attractive yields, which is in contrast to behaviour that would be associated with a recession on the horizon.

Can both be right?

For the uptrend in equities and bonds to remain intact, the right mix would be needed: inflation would have to remain contained, whilst markets would also need to remain unperturbed by weak growth outside of the U.S., heightened cost pressures coming through to corporates, and the acknowledgement that central banks have little ammunition to prolong the expansion.

In the absence of this perfect storm, investors are left scratching their heads as to whether equities or bonds will extend their respective uptrends at the expense of the other.

Riding in tandem, for now

But given the current environment, it is not uncommon for equities and bonds to rally together when the Fed stops a hiking cycle. In previous cycles, bond and equity indexes rallied strongly in the months following the final rate increase (see chart below). It is not until after the first rate cut when the waters become murky: historically, equity performance has been mixed while bond yields have tended to extend pre-rate cut downtrends, particularly in the near term.

Bonds and equities tend to rally together after final Fed hike 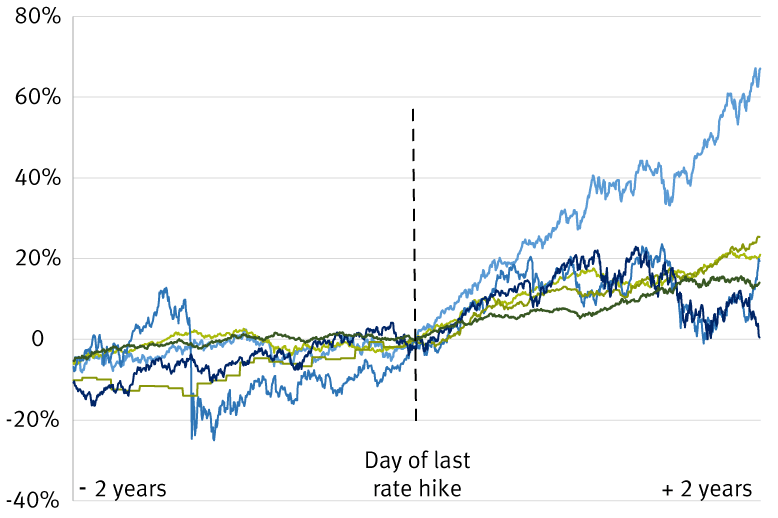 With the Fed set to deliver its first rate cut in a decade on July 31, in our view, the pendulum could swing to bonds edging out the victory, at least in the short term.

Position for an eventual winner

The Fed is walking a fine line between strong domestic consumer conditions and weak external forces stemming from trade war tensions, the possibility of a no-deal Brexit, and economic weakness in Europe and China. With the balancing act extending to equity and bond markets, the scales could be tipped by how the economic outlook unfolds, and, in turn, what the Fed and other central banks do next.

Signs of global growth stabilizing alongside a bottoming out of U.S. leading economic indicators could tip the scales in favour of equity outperformance, with yields turning higher alongside markets paring back rate cut expectations. On the other hand, further deterioration in the growth outlook and a more aggressive pace of monetary policy easing would likely favour room to run for the bond rally.

To satisfy our sweet tooth without overindulging, we prefer to maintain a Market Weight allocation to global equities with a bias towards upgrading the quality of stocks. But to protect against an unexpected toothache, we are also Market Weight in global fixed income.