The long-anticipated taper announcement came. But there are a lot of moving parts to the Fed’s outlook and we address three burning questions.

The broad strokes of the Fed’s asset purchase tapering plans are as we expected: its $120 billion per month in asset purchases will be cut by $15 billion per month, starting this month, a pace that would bring bond buying to an end by June of next year. The pace could be adjusted up or down based on economic developments, but we see little reason to think that will happen at this stage—boring is better for markets.

The bigger factor, and the one driving sharply higher front-end yields of late, has been the market’s repricing of rate hike expectations. Just prior to the Fed meeting this week, markets were penciling in as many as three 0.25 basis point rate hikes next year, and though expectations have cooled following some pushback from the Fed, the current policy tightening timeline from tapering to the first rate hike remains highly truncated compared to the last cycle. And probably still too truncated, in our view.

Too much too soon? 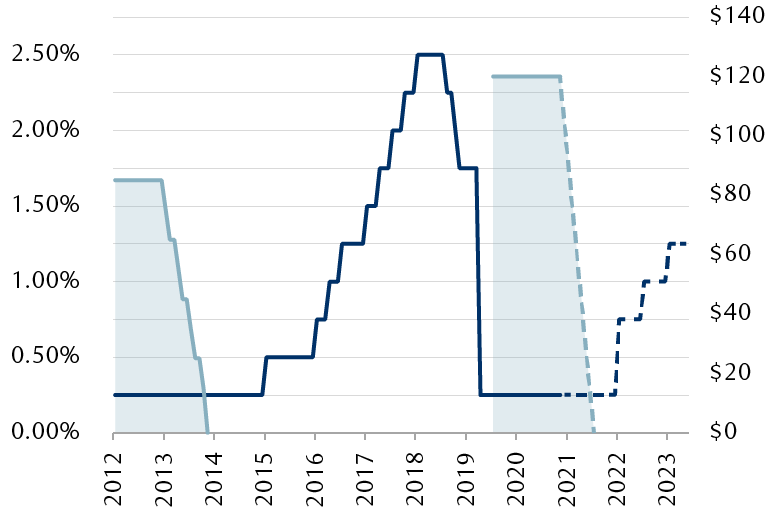 So while the long-anticipated taper announcement was the highlight of the meeting, there are a lot of moving parts with respect to the Fed’s outlook and market dynamics at the moment, so perhaps it’s best to address some burning questions.

1) Inflation is high … why isn’t the Fed worried about high inflation?

This was the key development from the Fed’s official statement: Policymakers still expect inflation to be “transitory” despite it proving more persistent than they expected. Had they dropped that characterization of inflation, it likely would have emboldened the market and its expectations for multiple rate hikes next year.

The simple fact remains that much of the pricing pressure is concentrated in certain sectors exposed to supply and demand imbalances—which are largely beyond the reach of the Fed’s policy tools—a point the Fed made by inserting language alluding to such in its statement.

And as Fed Chair Jerome Powell stated during his press conference, the U.S. has a dynamic economy that is more than capable of rebalancing itself in coming months, likely easing inflationary pressures.

2) What is “maximum employment” going to look like this cycle?

We believe this is the key issue for the Fed and will determine the outlook for rates; it also relates to issues around inflation. Put simply, the Fed is looking for inflation, but the right kind of inflation—and that is stable inflation around two percent that is being fueled by an economy and labor market operating at full capacity—broadly speaking that’s not what we have today, but when we will is the million dollar question.

Labor force participation holds the key here: There has been a boom in early retirements, estimated by the Fed to have topped three million, partly explaining (but not completely) why the total labor force is still five million people shy of pre-pandemic levels, while obfuscating an official 4.8 percent unemployment rate, which may or may not overstate the true tightness of the labor market.

And without a doubt, getting it right this economic cycle will be an enormous challenge for the Fed.

If the central bank gets it wrong and raises rates too soon, it risks cutting short the economic expansion in addition to labor market gains, opportunities, and higher wages for millions of people.

If the Fed gets it wrong and raises rates too late, it risks a wage-driven inflationary spiral of higher prices due to higher labor costs, which then loops back to higher wages, and higher costs.

If the Fed gets it right, well, it will look like 2019 when the unemployment rate was just 3.5 percent without any real signs of intolerable inflationary pressures.

3) Why are yield curves flattening, what is the market telling us?

Finally, if there’s one thing to pay attention to, we think it’s the shape of yield curves. Over the course of a business cycle, the slope of the Treasury yield curve steepens, flattens for some period of time, and then inverts—which historically has preceded recessions.

Net change in yields since May 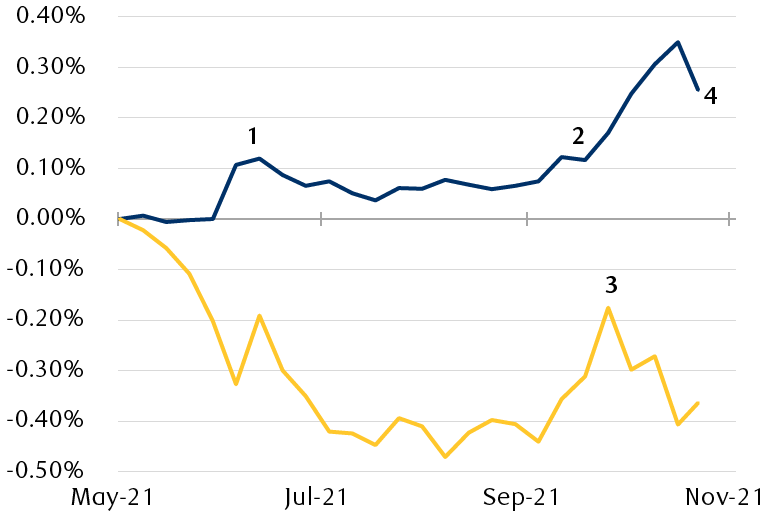 Short-term yields have risen sharply both in the U.S. and globally on rising central bank rate hike expectations. Long-term yields, more reflective of long-term growth and inflation expectations, have actually been falling for most of the year. That has brought our preferred segment of the curve, the difference between 5-year and 30-year Treasury yields, to the lowest level since before the pandemic started at just 0.85 percent—suggesting that either the market has priced in too many rate hikes or that the growth and inflation outlook is deteriorating. We believe it’s likely some combination of the two, as they are related.

In our view, the market got a bit carried away recently in terms of pricing multiple Fed rate hikes next year. We expect the Fed will continue to have cause to remain patient, and that policymakers will continue to gently push back against market expectations, which should drive a modest resteepening of yield curves. But for investors, yield curves will remain the best barometer of whether the Fed is at risk of making a policy mistake, especially as the end of asset purchases gives way to a potential rate hike cycle in the middle of next year.

Inflation aftershock: The implication for investors

Consumer prices are the highest in years. What are the risks for the equity market?

It’s not a surprise the market has cooled. While there may be more volatility due to many headwinds, we think the bull market can ultimately regroup.