There’s more to the equity pullback than trade fears. Meanwhile, China’s threat to dump Treasuries is much ado about nothing.

You wouldn’t know it by looking at the one-week change in the Dow Jones Industrial Average Index, which is essentially flat, but volatility showed no signs of abating during the week as, you guessed it, trade war fears and uncertainty continue to hang over global markets. The Dow traded in a range of nearly 800 points for the week, amid a range of nearly 1,500 points thus far in May, some of the largest market swings since January.

In response to the U.S. tariff increase on $200B in Chinese goods to 25%, China took the relatively measured step of imposing 10%–25% tariffs on another $60B worth of U.S. imports, but China’s response isn’t scheduled to go into place until June. Regardless, both sides appear to be at loggerheads, with uncertainty likely to remain.

As a result, RBC Global Asset Management Chief Economist Eric Lascelles shifted his stance on the outlook for trade scenarios, now seeing “substantial tariffs” as the most likely scenario. But as we note in the table below, even with a deal there is little upside to the growth outlook, the fact remains that tariffs only pose downside risks for both countries.

On the bright side, the Trump administration did announce that it would delay for six months any levies on auto imports from Europe and Japan while trade talks continue. This largely sparked the rally that fueled the rebound in most global stock markets—a clear sign that markets would like nothing more than to see an agreement, no matter how superficial, and to move on.

Markets were understandably shaky after the tone of the trade negotiations abruptly changed. After all, equities had rebounded from the December 2018 lows thanks not only to a pause in monetary policy plans from the Federal Reserve, but also from a stabilization in global economic growth and fading protectionist threats.

Is it really all about trade fears?

RBC Capital Markets, LLC Head of U.S. Equity Strategy Lori Calvasina points out that complacency had set in after the strong rally and with Q1 corporate earnings proving better than expected. This left the stock market somewhat complacent, with signs of crowding and vulnerable to some profit-taking.

Volatility has been capped by the hope that cooler heads will prevail. The U.S. is anxious to sustain economic growth ahead of the 2020 presidential election, as is China, given its recent fiscal stimulus to stabilize growth.

The S&P 500 was ripe for a correction 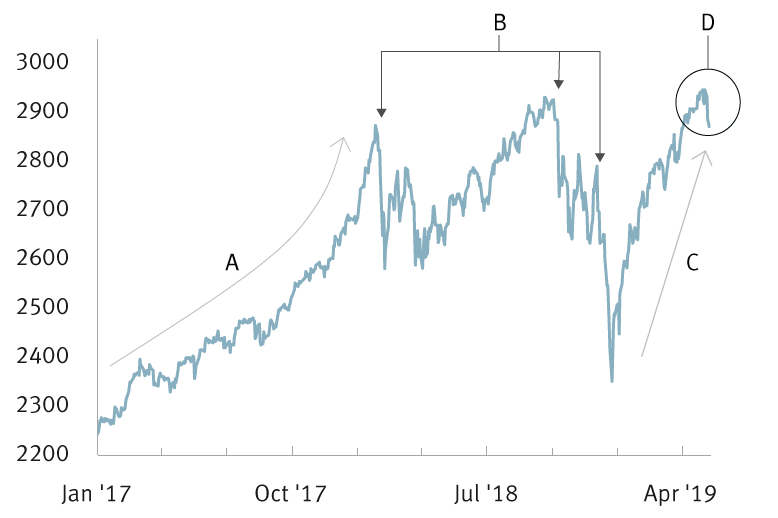 As such, we think the conditions will soon be in place for markets to eventually rebound, barring a deterioration in trade rhetoric. After all, monetary policy is accommodative in most regions, and underlying economic conditions remain good. The dent from protectionism to economic growth in both the U.S. and China would not be enough by itself to drive either country into recession, in our view. We are comfortable with our Market Weight position in global equities.

Sell in May and go away?

Treasuries, that is. Shifting to the U.S. fixed income market, the latest wrinkle in this trade war spat came amid stories that scholars in China are exploring selling Treasuries as a potential rebuttal to any further escalation in either tariff rates or their scope, the idea being that dumping Treasuries could drive up borrowing costs for U.S. businesses and consumers.

Of course, this has long been a threat—and fear for investors—given that China is the largest foreign holder of U.S. Treasuries, though Japan’s holdings are essentially equal, at around $1.1T. But as the chart below shows, China’s holdings have been in a state of steady decline for years, both in terms of its absolute holdings and as a percentage of all outstanding Treasuries, the latter perhaps limiting its influence.

China’s influence in the U.S. Treasury market has been waning for years 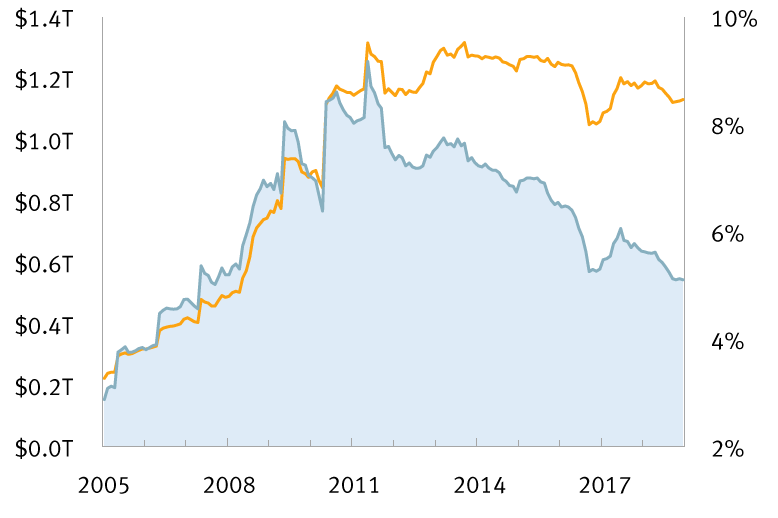 All told, while China may attempt to use the threat as a bargaining chip, we don’t see it as realistic and recommend that investors focus their worries elsewhere. We continue to see little risk that Treasury yields move markedly higher from current levels, maintaining our view that the 10-year Treasury will remain below roughly 2.75% for the foreseeable future. We reiterate our Market Weight stance in U.S. fixed income.