The Fed thinks its rate cuts will reduce economic uncertainty and a phase one trade deal appears at hand. Will either shift the investing landscape?

The final Federal Reserve meeting of 2019 confirmed what many officials have already pledged publicly in recent weeks: the Fed is well and truly on hold having delivered three “insurance” rate cuts in recent months. Additionally, there is no longer a rift at the Fed between those who wish to ease policy, and those who did not, as a clear majority—13 of 17 officials—now see policy rates unchanged through 2020—a consensus that markets viewed favorably.

This meeting was by no means one of the more eventful ones in recent memory, but another key development came from the Fed’s official statement. Language referencing “uncertainties” about the outlook was dropped, while an acknowledgement of “muted inflation pressures” was added.

While removing the reference to uncertainties suggests the Fed will be in no rush to cut rates absent a material economic downturn, we simply see this as the Fed wanting to shift the narrative back to the fundamentals of inflation and U.S. labor markets, which Fed policy influences, and away from the ancillary fears of late around trade wars and other factors that it has less control over. This proved prescient as news reports late on Thursday afternoon suggested the U.S. has a trade deal in “principle” with China, and that President Donald Trump has signed off on it.

While we await complete details on any truce, we believe that such a deal has largely been priced into markets already. However, business confidence and investment, the parts of the U.S. economy that have borne the brunt of the impact of ongoing trade uncertainty, could improve in the first half of 2020.

Regardless, the Fed can’t stay on hold forever, and in fact, rarely does. But while our base case remains that the Fed will keep policy on hold, and that any bias remains toward further easing, what are the chances that the Fed cuts further, or even resumes the rate hike cycle?

The bar to hike

Somewhat curiously for a Fed coming off three consecutive rate cuts, much of the questions directed at Fed Chair Jerome Powell during the press conference centered on the prospects for a resumption of the rate hike cycle, rather than the prospects for further easing.

Perhaps this was simply a reflection of the recent stabilization in the economic backdrop, some progress on trade, and another strong jobs report in November that saw the unemployment rate dip back down to 3.5%. But Powell made one thing clear: he won’t even entertain the idea of a rate hike until inflation returns to 2% on a “persistent” basis. And even in the face of historically low unemployment, he said the Fed still sees slack in labor markets that is depressing wage growth.

How long might that remain true? As we see in the chart directly below, an index from the University of Michigan Consumer Survey released last week showed that the balance of consumers expecting higher household incomes over the next year, relative to those who think their incomes will be lower, is at one of the highest levels on record, while an index of wage growth has accelerated to 3.7%, essentially the fastest pace this cycle. 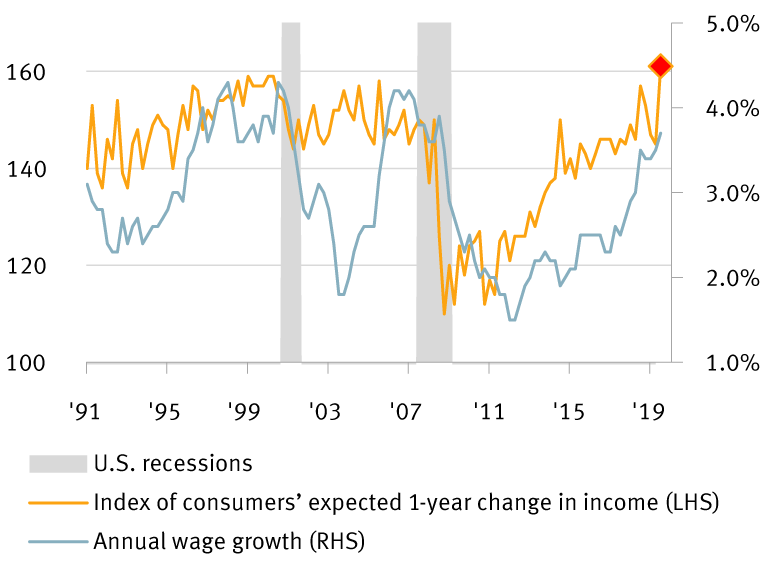 For now, this will be a welcome development at the Fed. But if there’s one thing that might shift the Fed back into tightening mode, it would likely be a labor market showing signs of overheating.

The bar to cut

As Powell put it, it would take a “material reassessment” of the economic outlook for the Fed to cut rates further—which essentially means that the Fed may want to use rate cuts to fight the next recession when it eventually arrives—partly driven by the fact that the Fed can only deliver six rate cuts until interest rates are back at the 0.00%–0.25% range.

With the Fed on pause, yields likely to remain range-bound 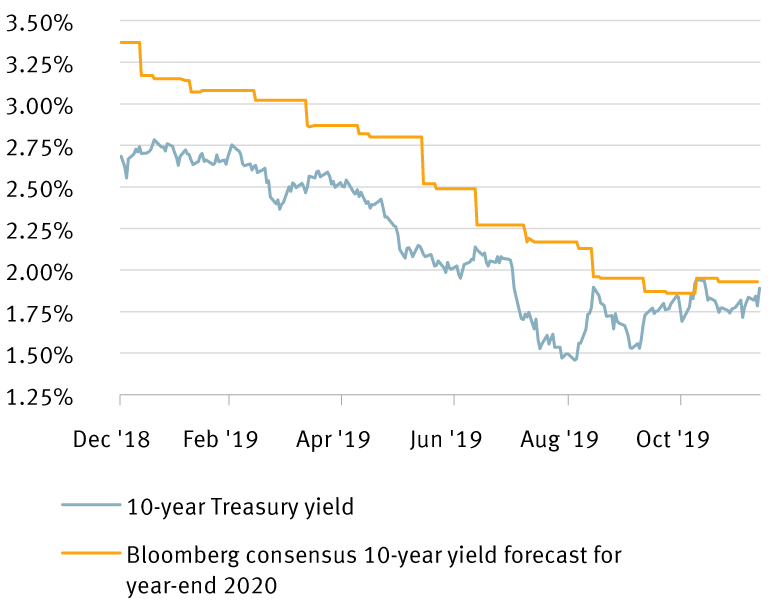 Our primary concern here is that if the Fed is reluctant to ease further in order to sustain the expansion that in itself could raise recessionary risks. Regardless, markets continue to price a roughly 80% chance that the Fed cuts rates again at some point in 2020.

With the Fed on hold, we largely expect Treasury yields to trade around current levels for the foreseeable future. Even an unexpectedly strong jobs report and positive developments on the trade front have failed to send the 10-year Treasury yield back above 2%, a level below which it has held since the Fed delivered the first rate cut back on July 31. We continue to view 2% as the speed limit, meaning that any rise in yields toward that level would be an opportunity for fixed income investors to put money to work.