A prime example of this was last week’s turmoil in the UK where the announcement of new unfunded tax cuts threw the government bond market (gilts) in a spin, forcing the Bank of England (BoE), as the lender of last resort, to intervene in an attempt to restore orderly market function. Within a week, the UK 10-year yield soared to 4.6 percent from 3.29 percent, while the pound plunged from 1.14 to the USD to a low of 1.03, a record low against the greenback. Fearing systemic failure, the BoE, which had intended to start to sell the government bonds it had accumulated during the COVID-19 pandemic on Oct. 3, announced a temporary bond purchase programme to run daily until Oct. 14.

What do we believe was the cause of such a fallout? Against the backdrop of precarious national finances and double-digit inflation, the new government’s economic policy lacked credibility. New tax cuts of some two percent of GDP, on top of the previously announced energy support package of some six percent of GDP, were perceived as adding to inflationary pressures and increasing the national debt to unsustainable levels. The market’s expectation of peak interest rates was pushed beyond six percent at one point. The FTSE All-Share reached a one-year low.

Markets used to cheer the news of new tax cuts, as borrowing costs were low and central banks, via quantitative easing, were natural buyers of large amounts of bonds. But circumstances have changed. RBC Global Asset Management Inc. Chief Economist Eric Lascelles points out that debt service costs have soared due to the rise in interest rates. Furthermore, central banks are no longer actively pursuing quantitative easing, depriving markets of a useful source of bond demand, even as many nations’ fiscal deficits remain large. Lascelles believes that is why the supply and demand of public debt is again becoming a relevant determinant of bond yields.

Marc Dowding, chief investment officer at RBC BlueBay Asset Management, points out that contagion risks should not be ruled out. Previous episodes of financial stress, such as the collapse of the hedge fund Long-Term Capital Management in 1998, have shown us that their impact can be felt far and wide.

As systemic risk is increasing due to global liquidity tightening, investors are also becoming much more selective about what risks they are willing to take. Even as calm returned to UK financial markets, market participants focused on troubled Swiss investment bank Credit Suisse, a ‘globally significant bank’, as labelled by the Bank for International Settlements, the central banks’ bank. Its share price already tumbled more than 40 percent year to date, and its credit default swaps, or the premium to buy insurance against a default, spiked to record highs. In our view, credit and equity markets turning against a large bank points to increasing investor concern.

Volatility over the past 10 days may be a taste of things to come as financing conditions tighten further. More than 20 central banks have increased interest rates so far in 2022, in a synchronised attempt to quell inflation. Many have been very aggressive. In the U.S., real interest rates, or interest rates after taking inflation into account, have moved up at a pace unmatched in the recent past, reaching 1.7 percent. Even in the eurozone, which has been, until recently, beset by negative interest rates and very low inflation, real rates are now in positive territory. 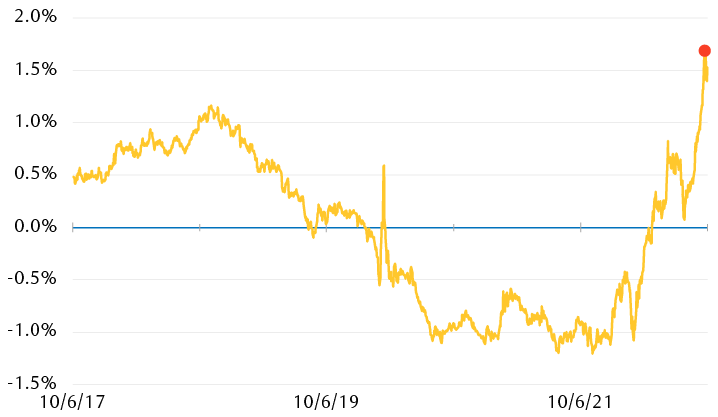 Line chart showing US real rates over the past five years. Real rates, which had been positive, started to decline at the end of 2018 and fell into negative territory in earnest in 2019. Except for a brief period in first quarter 2020, they remained firmly negative until early 2022. Since then, real rates have started shooting up, reaching a five-year high of 1.7 percent at the end of September 2022.

We believe more hikes are in the offing. In the U.S., the Personal Consumption Expenditures Price Index, the Fed’s favourite tool to gauge inflation, rose 0.3 percent month over month, exceeding consensus expectations and diminishing the possibility of a rapid halt to the U.S. central bank’s tightening. The European Central Bank and BoE have both signalled they are likely to continue to hike aggressively, even in the face of slowing economies. 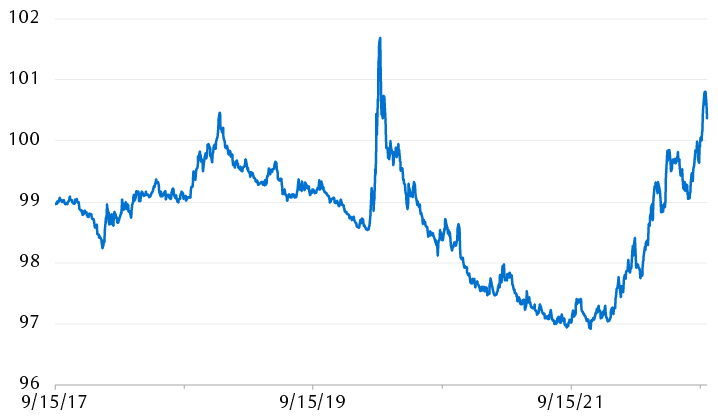 In early 2020, financial conditions loosened as the Fed embarked on a bond-buying program. U.S. conditions have tightened steadily since then due to the Fed's hiking cycle.

Not only are central banks increasing rates in a synchronised fashion, but the Federal Reserve is also passively reducing the size of its balance sheet by letting up to $1 trillion of securities it holds mature without reinvestment in a 12-month period, a move which Fed Chair Jerome Powell estimates could be equal to an approximate 0.25 percent interest rate increase. Though the Bank of England has postponed its plan for quantitative tightening, it expects to initiate its programme before year end.

While the Bank of England managed to calm markets, thanks to its market intervention, we believe further bouts of volatility are possible in the coming months as central banks continue to tighten monetary policy, debt servicing costs rise, and investors become more circumspect about financial vulnerabilities.

With investor sentiment very depressed and global equity markets, as tracked by the MSCI World Index, down more than 25 percent year to date, we believe a trading rally is possible. We would use this opportunity to review the quality of companies in portfolios, focusing particularly on those with clean balance sheets and the ability to generate strong cash flow. As higher interest rates work themselves through economies, we would be favourably biased towards defensive stocks. Markets becoming more selective about what risks they are willing to take suggests to us it would be best try to avoid being in their crosshairs.