Chronicle of a spike foretold

Both the Fed and the market are estimating a sharp spike in economic activity and inflation in the coming months, driven by the $1.9 trillion fiscal stimulus, economic reopening releasing some or all of the accumulated $1.6 trillion in excess consumer savings, and year-over-year comparisons to a largely shut-down global economy. These forces are powerful but potentially ephemeral. Stimulus payments are generally one-time or short-lived in nature and the majority of economic gains during the pandemic have accrued to investing households who tend to save at a higher rate than the median. After an initial bout of spending, these households may well return to saving. For these and other reasons, the Fed has already telegraphed that it will discount near-term price spikes and instead wait for confirmation that inflation expectations are well-entrenched at or above target level. This is likely a multiyear process as the Fed evaluates business and consumer trends.

The infrastructure bill will likely be subject to considerable revision during the legislative process and may never pass into law. Whatever its final form, the key considerations for the Fed are likely to be the magnitude and duration of the spending plan and the distribution toward higher consumption, lower-income households. The more pronounced and durable the fiscal impact, the greater the Fed’s flexibility to adjust monetary accommodation. We believe long-term investors will be well-served to focus on the infrastructure plan and its ramifications and de-emphasize the large, but expected, increases in near-term inflation.

In addition to the spending aspects of the plan, there is considerable uncertainty around its funding. The plan calls for higher corporate taxes to cover the bulk of the costs. Even if Congress were to raise the statutory corporate tax rate, the effective rate for large corporations will likely remain well below that mark. According to the Treasury Department, U.S. multinationals currently pay less than eight percent of earnings to the U.S., despite the 21 percent corporate tax rate; under the prior 35 percent tax regime, actual collections amounted to only 16 percent. As a result, legislation notwithstanding, a large portion of any spending plan is likely to be funded by government borrowing. 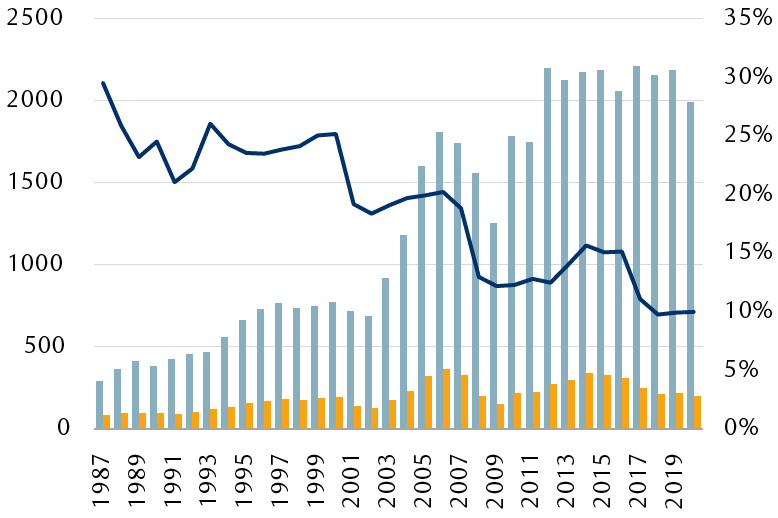 But with nearly $22 trillion—or just over 100 percent of U.S. GDP—in existing federal debt, some in Congress have questioned the sustainability of additional borrowing. In testimony to the Senate, Treasury Secretary Janet Yellen addressed those concerns in part by highlighting that low interest rates keep debt servicing costs down and allow the U.S. to comfortably manage higher debt-to-GDP levels. This position has also found support from former Treasury Secretary Lawrence Summers, an outspoken critic of current policy. In a paper written late last year, he suggested that debt-to-GDP was an inappropriate measure and that keeping inflation-adjusted debt service costs—currently near 0.5 percent in the U.S.—below two percent of GDP was a better target. 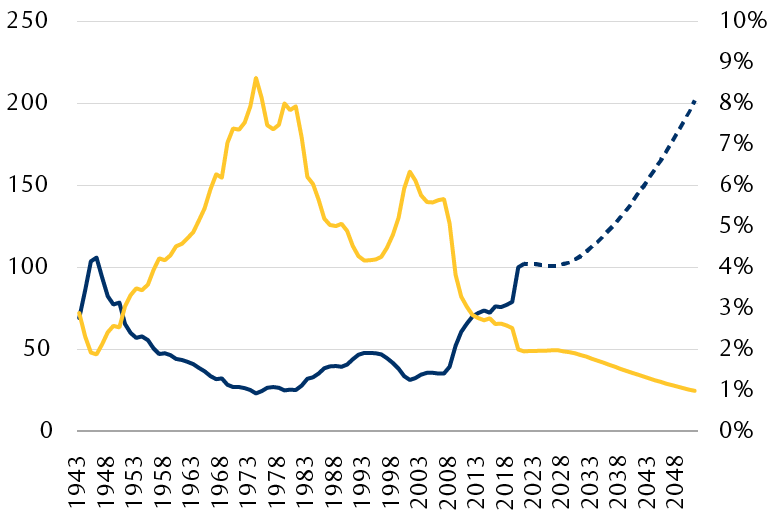 A focus on federal debt service costs would imply the need for a different type of monetary accommodation. Rather than attempt to stimulate demand by pushing bond yields and credit spreads down across the board, the Fed would be able to more narrowly focus on Treasury funding rates and inflation. It could likely accomplish a two percent real rate with a more normalized interest rate policy, although potentially with added emphasis on asset purchases and with a consistent tolerance for higher inflation.

A rejuvenated fiscal policy has the potential to achieve the Fed’s employment and price goals more quickly than monetary policy can accomplish, theoretically freeing the Fed to reduce accommodation. At the same time, based on how fiscal policy is funded, the Fed may face a new set of limited constraints against rates rising, this time in the form of federal budgetary pressures. As a result, the Biden infrastructure plan has the potential to improve the existing, highly supportive policy framework, by allowing for monetary policy normalization with potentially limited impact to asset prices.

This article was originally published in the Global Insight Weekly with the title "Infrastructure, inflation, and a possible Fed policy rethink."

Beyond financial statements: What makes a company sustainably successful?

We discuss how ESG factors can be a driver of investment value.