U.S. markets could change course more quickly, and in different ways, than investors might assume.

U.S. markets could change course more quickly, and in different ways, than investors might assume. Even if the economy succumbs to recession in 2023, if history is a guide, the equity market would likely begin a new bull market cycle before the recession ends. In fixed income, we think the window to put money to work is now open, but could close sooner than expected. In our view, it’s time to bring portfolio asset allocations in line with long-term strategic recommendations.

We’re not there yet, but we are getting closer

“Are we there yet?” This classic question that parents and grandparents are often asked on long road trips was posed by our U.S. Investment Committee in June 2022. At that point, we noted there were orange cones along the roadside and there was a need for more economic data for better visibility. Some months later, our answer now is, “We’re not there yet, but we are getting closer.”

First, it would be rare for the S&P 500 to deliver back-to-back negative return years. They have occurred only twice in the post-WWII era. The market has already absorbed significant blows, including one of the Fed’s fastest and biggest tightening cycles in history. On the former, we think the Fed will slow the pace of rate hikes, maybe as soon as the December 2022 meeting; and on the latter, we think the rate hike cycle is poised to end in 2023.

Only two periods of back-to-back negative U.S. equity returns in the post-WWII era 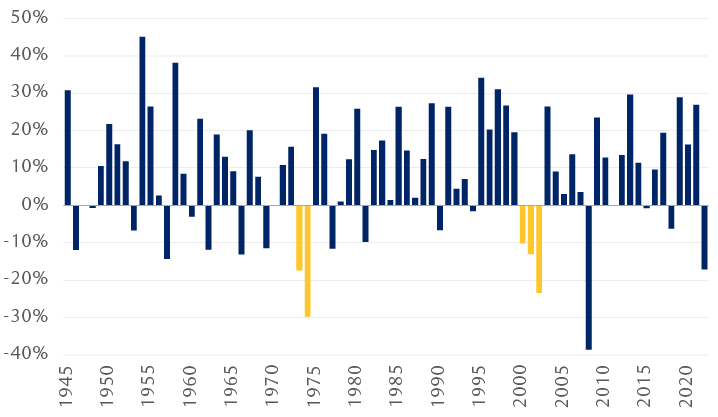 Second, the corporate earnings outlook is “less bad” than in previous periods of economic stress. If 2023 S&P 500 earnings end up flat compared to 2022 at roughly $220 per share—a scenario we think is possible—most institutional investors would likely breathe a sigh of relief. Even if a recession materializes and brings with it deeper cuts to consensus earnings estimates, we think household spending would be relatively more resilient than in recent economic contractions. Household balance sheets appear to be in better shape due to sturdier employment trends and high savings levels when this period began.

Third, equity market sentiment could benefit from declining inflation in 2023. Price trends for commodities and goods are already pointing in this direction.

But don’t misunderstand—we’re not Pollyannaish about the market’s prospects for 2023. There are reasons to remain vigilant. The economy is still at risk of succumbing to a recession. If S&P 500 earnings come in around $220 per share or less, this below-average growth rate would leave little room for price-to-earnings valuation expansion and profit margins could come under pressure. And while we anticipate inflation will decline, there is an open question as to how fast and to what degree. This can impact the market’s valuation. Generally, elevated inflation and interest rates over the medium term result in lower equity market valuations, and vice versa.

We think the most important objective for investors is to review portfolios and bring them in line with long-term strategic allocation recommendations. Allocations naturally get out of whack during corrections, and there is industry evidence that large cash positions have piled up in portfolios. We think attempting to time the market is a precarious exercise. There is no bell that rings when a new bull market cycle begins. Missing the biggest rally days can have detrimental long-term performance consequences, and such rallies often occur unpredictably before all of the obstacles are out of the road. 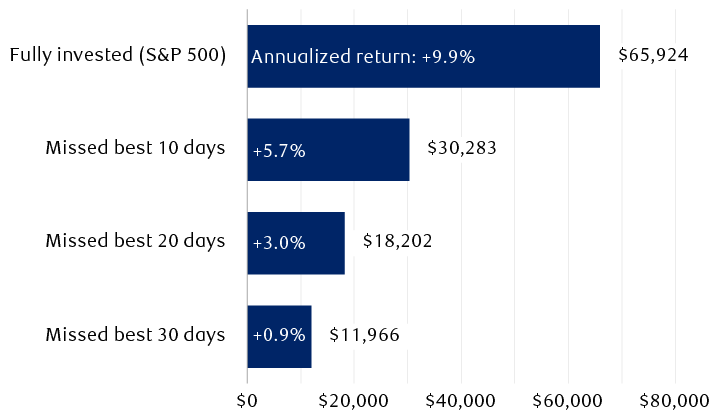 Once allocations are brought back into balance, we would keep an eye out for opportunities as the economic, interest rate, and earnings pictures start to become clearer.

Currently, we favor the small-capitalization and midcap segments of the U.S. equity market. Their valuations are relatively inexpensive compared to large caps and their own historical averages. This should provide a cushion as earnings estimates adjust further. When the U.S. economy works through challenging periods, these more economically-sensitive segments often lead the early stages of the next bull market phase.

Within the large-cap S&P 500, we continue to favor the Energy sector. Consensus earnings revisions are holding up better than most sectors. Tight energy commodity supplies are unlikely to be fully resolved in the near or medium term due to many years of capital underinvestment. This should help support commodity prices and Energy company earnings to a greater degree than in typical periods of economic weakness.

2023 to see the Federal Reserve embark on its third act

A dual mandate. In 2021, the Fed’s sole focus was returning U.S. labor markets to “full employment,” the first side of its congressionally-given dual mandate, and long-judged by the Fed to be around 4.0%. Unemployment fell to 3.9% in December 2021 and has remained at and even below the target level since. In 2022, the Fed became hyper-focused on returning the economy to “price stability,” the second side of its mandate and defined as prices rising 2% annually on average through any given business cycle. While it will take time for the inflation to get there, the aggressive action from the Fed in 2022 has laid the foundation for it to return to target in due course, in our view.

Financial stability in focus. That now sets the stage for the Fed to turn its focus in 2023 to its unofficial third mandate—financial stability. The historically aggressive tightening campaigns by the Fed and many other global central banks will likely necessitate a far more cautious approach from policymakers, and a heightened focus on—and consideration of—domestic and global financial vulnerabilities that may come as a result of higher interest rates, particularly from the strength of the dollar. This could mean the Fed soon places the blunt tool of rate hikes back in the toolbox and employs more surgical, macroprudential measures that help to ensure the soundness of, and liquidity within, the financial system.

Interest rates to peak in early 2023. We anticipate the Fed’s likely 50 basis point rate hike at the Dec. 13–14 meeting will bring short-term rates to a 4.25%–4.50% range and will mark the last of the jumbo-sized moves. Any further rate hikes in 2023 should continue at 25 basis point increments, and only if justified by the incoming data, while attaining a level no higher than 5.00% by Q1 2023, in our view. Then, as the generally assumed 12– to 18–month lagged impact of rate hikes that began in March 2022 begin to significantly weigh on economic activity by the middle of 2023, we foresee the Fed delivering a series of modest rate cuts over the course of the back half of the year as it works to engineer some semblance of an economic soft landing.

Yields to fall. Markets, forward looking as they are, may already be in the process of pricing in such a scenario as recent soft consumer and producer price data have driven Treasury yields sharply lower from this year’s highs. We believe the sharp rise in yields across the fixed income landscape that played out over the course of 2022 will give way to the opposite in 2023. For example, the benchmark 10-year Treasury yield could fall below 3.5% by the end of the year, from levels close to 4.0% currently, based on RBC Capital Markets’ forecast. 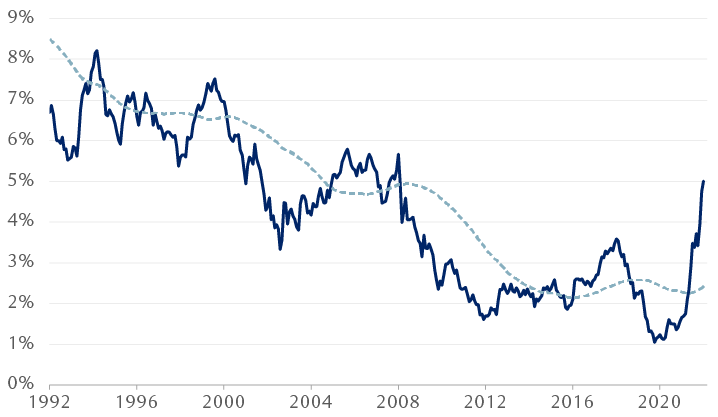 The line chart shows the average yield on investment-grade bonds in the U.S., represented by the Bloomberg US Bond Aggregate Index, monthly from 1992 to October 2022, as well as the rolling 5-year average. Average investment-grade bond yields in the U.S. have hit 5% through October 2022, the highest level since 2008 and more than double the five-year average yield of 2.4%.

Lock in high yields. The net result for fixed income investors is that the window to put money to work is open, and it could close sooner than expected. Based on Bloomberg bond indexes, Treasuries yielded 4.2%, investment-grade corporate bonds 5.4%, and tax-exempt municipals 3.7% as of November 22. Should yields on offer fade over the course of 2023, as we broadly expect, that could introduce heightened reinvestment risk for short-maturity securities. We continue to favor a strategy of locking in historically-high yields in intermediate and longer-dated bonds to maintain income, and to benefit from capital appreciation should bond prices move higher, and yields lower, due to recession risks in 2023 and the potential for Fed rate cuts as a result.

As a new strategic agenda begins to take shape in China, macro developments in Japan are relatively positive.

A turn towards austerity even as the UK economy enters a recession creates challenges for a new government.