Expectations that inflation would peak during the first half of the year now see that point materializing in the fall. The anticipated high-water mark has been pushed back given few signs that broad-based price pressures are easing, even as central banks are in the early stages of their rate hike campaigns. As a result, markets continue to price faster rate hikes, ultimately reaching a higher level, from most major global central banks than seen at any point yet this year.

Where will central bank rates end 2022? Much higher than believed at the start of the year 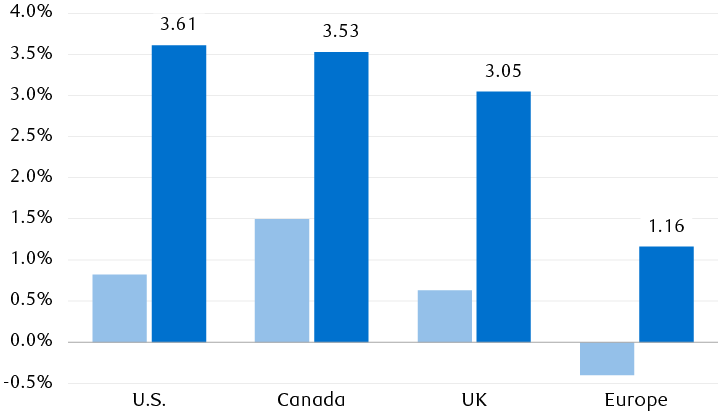 The Federal Reserve stepped up its tightening effort with a 75 basis point (bps) rate hike at its June meeting that took the fed funds rate to a target range of 1.50% to 1.75%.The latest move followed hikes of 25 bps in March and 50 bps in May, and marked the largest incremental rate hike since 1994. Signs appear to point to at least one more such move when policymakers meet at the end of July—before the pace is likely dialed back to either 25 or 50 bps hikes at subsequent meetings.

Not to be outdone, after delivering a fifth 25 bps rate hike in June, the Bank of England (BoE) looks poised to pick up the pace as well. Markets are expecting a 50 bps hike at the next meeting in early August, which would bring the policy rate to 1.75%.

The Bank of Canada (BoC) has been leading the charge with three 50 bps hikes this year as policymakers have chosen to err on the side of predictability, but you guessed it, it is also now likely to kick things up a gear with a 75 bps move this month to a policy rate of 2.25% based on current market expectations.

But while rising inflation has led central banks to accelerate tightening, a shift could soon be on the horizon.

A change in narrative

While the first half of the year was defined by a market increasingly focused on ever-higher inflation, the back half could see a shift to a market more concerned about ever-lower economic growth projections as tighter monetary policy takes a bite out of economic activity. 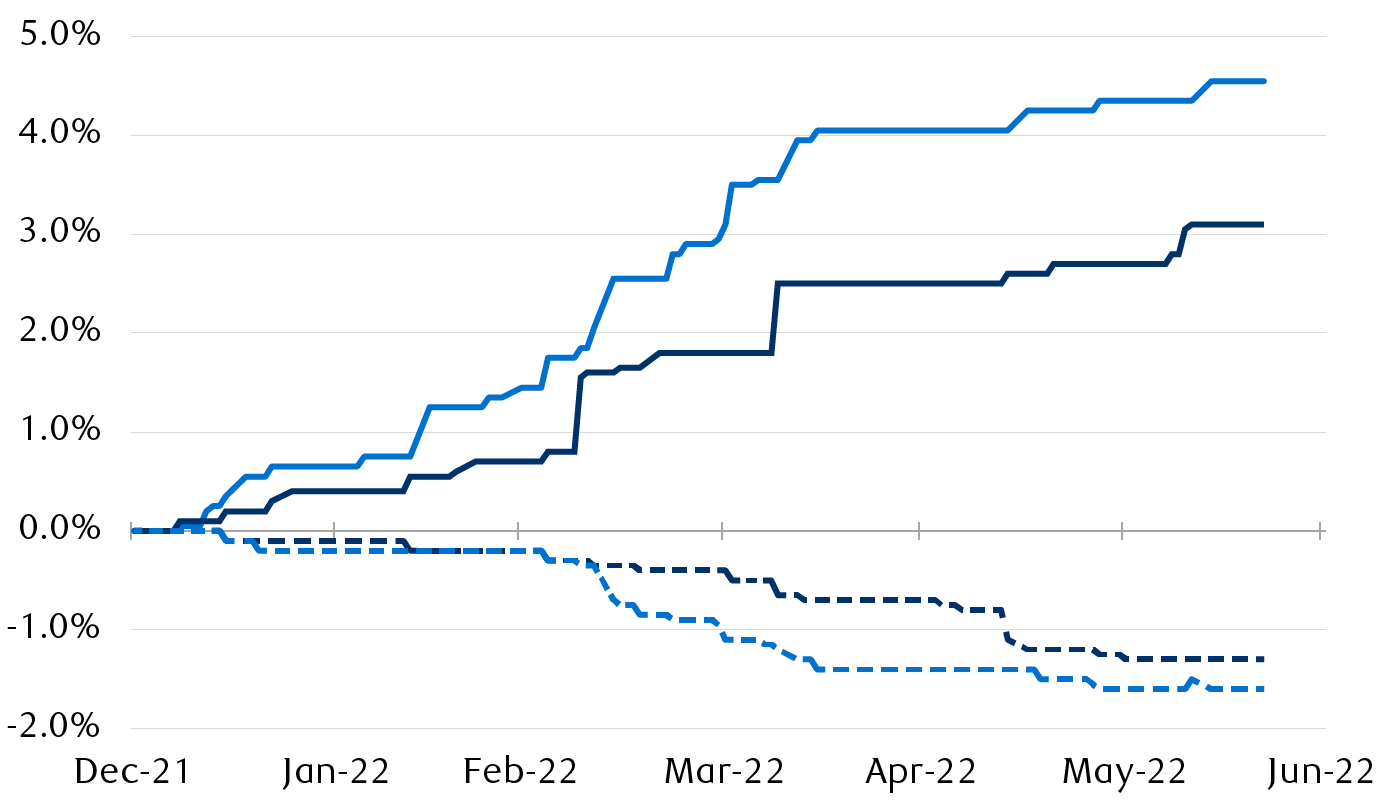 To be sure, both growth forecasts remain strong and above long-term trends, but the divergence between higher inflation and slower growth is also showing up in consensus forecasts for 2023.

And that could be the catalyst for an eventual shift not only in market expectations, but also in central bank sentiment.

Build them up, only to cut them down

Those central banks that have been the first out of the gate in raising rates, the BoE, the BoC, and the Fed, are now seen by markets as likely to cut rates at some point in 2023. The European Central Bank has yet to raise rates, but it is likely to bring the negative rate era to an end by September, and should remain in rate hike mode through next year.

It remains to be seen whether market expectations for modest rate cuts next year are because of rising recession risks or because of cooling inflationary pressures. But the latter remains the ultimate goal of central banks: to snuff out inflationary pressures as quickly as possible, but to not go so far as to choke off economic growth as a result.

But will it work? Well, history isn’t exactly on the side of central banks, as the majority of tightening cycles have culminated in economic downturns of varying severity. In the U.S., the Fed is relying on a historically strong labor market and solid consumer balance sheets to buy policymakers some time for the supply side of the economy to recover and to offset weakness in the housing sector as mortgage rates rising beyond 6% have already significantly slowed housing starts and new home sales.

In our view, the Fed will end the rate hike cycle in December at a level around 3.25% before pausing to assess the economic landscape in early 2023. If inflation has shown “clear and convincing” signs of slowing by then, the Fed could deliver a few “insurance” cuts that would take policy rates back to the 2% to 3% “neutral” range—the level at which rates neither boost nor restrict economic growth—a range that Fed Chair Jerome Powell has cited in recent months. Such a scenario is now our base case as we think the Fed’s efforts to this point in terms of forward guidance, rate hikes, and the subsequent tightening of financial conditions will ultimately do more to ease inflationary pressures and excess demand than is broadly appreciated by markets over the next 6–12 months.

The key takeaway for investors is that faster and more aggressive rate hike campaigns in upcoming months should mean that peak rate levels prove to be lower than otherwise might be the case, and that rate hike cycles prove shorter.

While global sovereign yields have risen sharply through the first half of the year, with the benchmark U.S. 10-year Treasury yield higher by 194 bps to 3.28%, and the German 10-year Bund yield up by 179 bps to 1.76%, we think it will be a different story in the second half. We believe short-term rates will continue to rise as central banks remain on the rate hike path, but yields at the longer end of sovereign yield curves could find a top sooner rather than later, and begin to fade into year-end—particularly if recession fears continue to grow.

After a historically poor start to the year for fixed income markets, we believe the downside protection and ballast provided by bonds could attract investors back to the asset class, helping to reverse first-half losses.

And as a result, yield curve inversions—historically a leading indicator of recession risks—could become the focus point for markets and the basis for a new prevailing narrative in a number of regions later this year, serving as a key indicator for investors in gauging whether central banks are at risk of tightening beyond the point of snuffing out inflation, and to the point of snuffing out economic expansions.

Building out the electric vehicle (EV) charging ecosystem is key to driving widespread adoption of electric cars. We explore the growth potential of this nascent market.

Will inflation determine the future of equities?

As policymakers look to tame inflation without triggering a recession, we look for catalysts that could signal the market’s path ahead.