Financial press headlines have increasingly focused on the probability of a U.S. recession in the next year, while Fed Chair Jerome Powell, in recent congressional testimony, acknowledged the potential for tighter monetary policy to spark a significant decline in economic activity, the key characteristic of a recession.

Too frequently, in our view, the press stops its analysis at discussing the odds of a recession without engaging the more important questions of the economic and investment impact of slowing growth. For fixed income investors in particular, we see several potentially important positive implications if growth declines.

Growth-constraining policies have a purpose

One way to think about inflation is as an imbalance between supply and demand that drives prices higher. In that framework, the solution to excessively high inflation is to either increase supply or reduce demand to bring the market into balance without relying exclusively on the price mechanism. With policymakers limited in their ability to impact short-term supply, the majority of the policy work is being done on the demand side. By its nature, reducing demand will tend to constrain growth.

The large decline, for instance, in the federal budget—which the nonpartisan Congressional Budget Office shows dropping to $5.8 trillion this year from $6.5 trillion in 2020—has helped limit government demand, which accounts for roughly 15 percent of GDP. The lack of government transfer spending has an impact on private consumption as well, but the main impact on individual households and corporations is likely to come from monetary policy.

One of the most notable aspects of this cycle is how effective the Fed has been in tightening policy through communication. With policy rates still in what both we and the Fed would consider accommodative territory, the central bank has managed to tighten financial conditions across tenors for nearly every sector of the economy. The Fed is in large part calibrating policy through a dialogue with markets; investors “speaking” through yield curves and the Fed validating or rejecting the implied policy path through a combination of speeches, testimony, and actual policy changes.

Policy rates accommodative, household and corporate monetary conditions are not 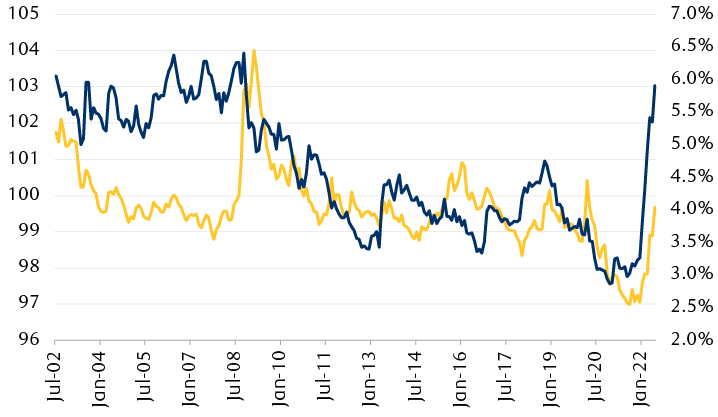 Line chart showing the rise in 30-year mortgage rates from 2.88% in mid-2021 to 5.91% today. The chart also shows via the Goldman Sachs U.S. Financial Conditions Index that financial conditions overall have tightened from 97 to nearly 99 year to date and are now above the median level of the past 20 years.

So in most of the ways that matter, the Fed’s tightening cycle has already been implemented—corporations and households are dealing with the impact of higher borrowing rates and are now rethinking spending as potential returns on available investments have moved higher. The actual rate hikes and policy moves the Fed will likely put into place over the next several months, therefore, are simply playing catch-up to the market.

Recession or not, slowing growth has likely arrived

The numbers bear out the impact of tighter fiscal and monetary conditions. While official GDP numbers are only updated four times a year and are reported with considerable lag, the Atlanta Fed has created a real-time GDP calculation, which shows the U.S. economy currently at or near a standstill in terms of economic growth.

There are also signs that reported inflation may be heading lower as a result of policy and slower growth.

One is the recent drop in commodity prices, with the Bloomberg Commodity Index down over 10 percent since its early June highs. Another is the reported inventory increases at major retailers as consumer tastes have shifted since the early days of the pandemic. High inventories are typically cleared through price discounts, adding to potential disinflationary pressures over the medium term. Finally, wealth effects have stalled, as the near doubling in mortgage rates since last year has effectively halted the use of mortgage refinancing to fund spending; at current rates, the number of households able to profitably refinance is negligible. 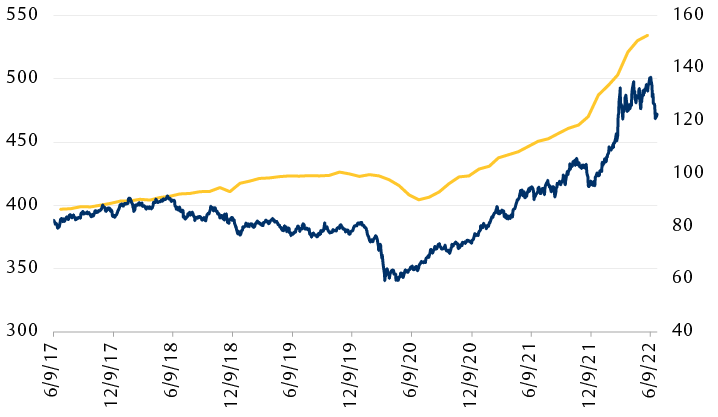 Line chart showing a rise in retail inventories to just under $540 billion from under $490 billion at the end of last year; the chart also shows a nearly 10% drop in the Bloomberg Commodity Index between mid-June and the end of this month (current reading: 122.27).

Focusing exclusively on the probability of a recession has two main shortcomings, in our view.

First, it ignores the questions of degree and duration. Some degree of slowing demand—and therefore slower GDP growth—is necessary to achieve price stability, barring a major and unanticipated uptick in supply. Whether that tips into the technical definition of a recession or a contraction is not particularly critical; the real world and financial market impact of 0.1 percent growth is not likely to be significantly different from a 0.1 percent contraction, for instance. Put differently, a 75 percent chance of a shallow recession is likely less problematic than a 25 percent chance of a deep and prolonged downturn—a single probability measure tells us very little.

Second, we need to consider the anti-inflationary consequences of slowing growth and the policy flexibility it creates. If we were to see a significant drop in inflation alongside economic growth declines, there would be space for the Fed to respond. One simple remedy to slower growth would be to guide the market to a lower terminal rate, potentially even a relatively rapid flip to rate cuts.

The potential for declining inflation alongside slower growth could make fixed coupon bonds—particularly those with long maturities—more attractive. In that environment, investors typically look at high-quality government and corporate bonds with more than 15 years to maturity. Securities backed by mortgages may be particularly appealing for some investors, as some of these securities combine very high credit quality with what we see as attractive prepayment characteristics.

There are of course risks to this view. If inflation remains elevated and the Fed is forced into more aggressive tightening, bonds across all maturities could suffer.

More than just a probability

We believe the majority of recession commentary is at best incomplete. We need to think about the secondary impacts of slowing growth, including the likely anti-inflationary impact and the policy flexibility it permits. While we are cognizant of the risks and the uncertainties, we believe that fixed income investors in particular may see positives in the current economic backdrop.

What opportunities could a slower-growth environment create for corporate bond investors?

Fed tightening is coming at a time of relative strength for the U.S. consumer. We look at what this means for fixed income investors.