Impact of the UK’s departure on the EU

Dawn is breaking for a new Europe, with changes that'll test its resolve. We look at what awaits the EU and what it holds for investment strategy.

The departure of the influential UK from the EU will be felt in the bloc, but this episode has also increased the union’s resolve and we expect it to adapt to the new state of affairs. After a weak 2019, the EU appeared to be turning the corner as 2020 began, but the manufacturing shutdowns in China brought on by the coronavirus outbreak are likely to push any European recovery into the second half of the year. Some anticipated fiscal stimulus should help matters on the continent, and we continue to see selective opportunities for investors.

The EU began in 1951 as a coal and steel trading bloc comprised of Belgium, France, Italy, Luxembourg, the Netherlands, and West Germany. Initially, the main purpose was for West Germany to expiate its role in World War II. By partly giving up its national sovereignty and integrating into a larger, demilitarized trading group with strict procedures, West Germany hoped for rehabilitation.

The other five founding members saw an opportunity for reconciliation and sought security in numbers, while France also viewed the group as a potential counterweight to UK and U.S. influence. Since its formation, the bloc has ushered in a period of peace and prosperity unseen in the continent’s history.

The UK was the first member to depart the group, which had grown to 28 nations. Despite being a late joiner in 1973, the UK became an influential EU member, given the size of its economy (second only to Germany) and penchant for free market practices. Along with the Netherlands, Sweden, Denmark, Finland, and Ireland, it formed a group known as the Nordic Alliance, which offset French policies favouring state intervention. The Netherlands, which has tended to keep a low profile despite being the EU’s fifth-largest economy, is likely to fill the vacuum left by the UK, though the Nordic Alliance may see its influence wane minus the UK.

However, the UK’s departure seems to have rallied support for the EU within the remaining countries as the political chaos that has engulfed the UK since the June 2016 Brexit referendum has not gone unnoticed.

Percentage of survey respondents who believe their country’s EU membership is: 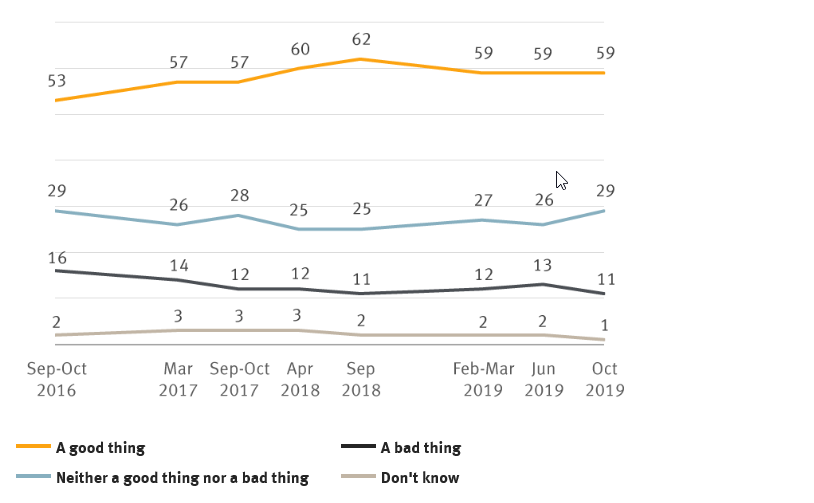 In fact, many anti-establishment populist parties across EU countries have mellowed their EU skepticism, instead railing against immigration to win votes. Populist parties in Italy, Austria, and Hungary all suffered electoral setbacks in 2019—though admittedly their poor showings could reverse if immigration concerns return to the limelight. As a sign the danger of a populist government in Italy seems to have passed, the spread of Italian government bond yields over German Bund yields has recently fallen from a peak of 324 basis points (bps) back to the March 2018 level of just 135 bps.

Now with 27 members, the EU will remain one of the top three economies in the world, though its share of global nominal GDP will fall from 16 percent to 14 percent, according to the International Monetary Fund.

Should the EU lose complete access to the UK market due to the breakdown of negotiations over a new trade agreement, we believe the impact would be modest as EU exports to the UK represent only three percent of EU GDP. Moreover, the damage would be partially offset by some diversion of trade, investment, and skilled migrants away from the UK to the EU.

Second, the loss of the UK’s net contribution to the EU budget, which amounted to some £9 billion (US$11.5 billion) in 2018, will be felt in Brussels, but only over time. The UK will honor its legacy financial obligations of more than £30 billion ($43 billion) per the terms of the Brexit Withdrawal Agreement.

Yet negotiations for the EU’s next seven budget years (2021–27) are particularly tricky given Britain’s departure, as EU members have to agree how to split the bill.

Challenges for the short term

For now, the EU faces other challenges. After a difficult 2019, economic activity at the start of 2020 had pointed to a healthy pickup in growth, but this improvement is now being threatened by the coronavirus outbreak. Factory shutdowns in China are affecting not only the EU’s export demand but also some of the supply chains of European companies. Eric Lascelles, chief economist for RBC Global Asset Management Inc., estimates the outbreak may reduce EU economic activity by some 0.2 percent, though the magnitude of the impact will likely depend on the duration and severity of the shutdowns. RBC Capital Markets expects 2020 GDP growth of one percent.

Calls on national governments for more fiscal stimulus are coming from many quarters, including European Central Bank President Christine Lagarde, who is aware that there are limited monetary policy maneuvers available with interest rates already in negative territory. Moreover, the region has considerable spare fiscal capacity, and with borrowing costs low, fiscal stimulus would not only be appropriate but also affordable. Indeed, France, Italy, and the Netherlands already dipped into government coffers a little in 2019, the former to appease the Yellow Vest protests against fuel tax hikes.

However, Germany is resisting these calls so far. Its constitution bans structural deficits of more than 0.35 percent of GDP. As a result, Germany has run a fiscal surplus since 2014, which peaked at 1.9 percent of GDP in 2018. German officials say they will do away with that constitutional rule if conditions warrant it. But with the economy at full employment, Chancellor Angela Merkel’s government feels the current slowdown isn’t sharp enough yet to justify a major one-off fiscal boost.

But it can devise strategies to work around, such as off-balance sheet vehicles issued by public bodies which can tap financial markets without appearing on the central government’s books. Recent incentives to speed up the conversion to cleaner energy were partially financed in this manner and could soften the impact of the slowdown.

A bit more spending expected in 2020 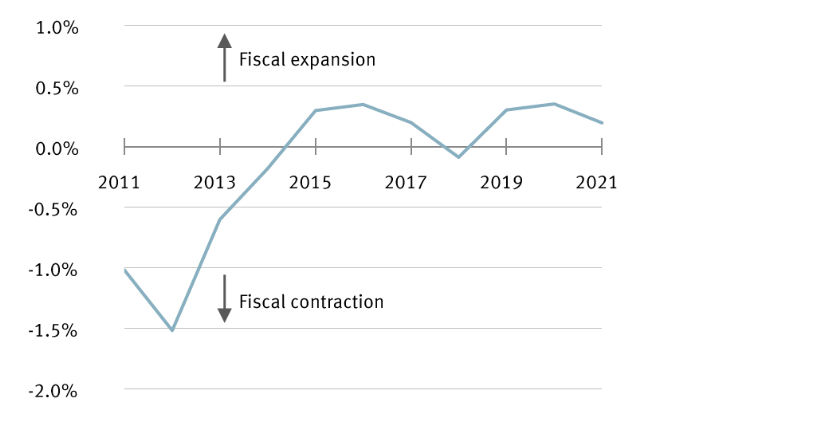 Fiscal spending could be more generous but it would require changing the fiscal framework.

For now, RBC Capital Markets expects fiscal stimulus of 0.4 percent of GDP for the EU as a whole in 2020.

Lagarde is also trying to push the EU Commission, the executive branch of the EU, for changes to fiscal policy. The commission is looking to loosen the current EU fiscal framework, which targets a debt-to-GDP ratio of 60 percent and a deficit of no more than three percent of GDP. These simple rules seem dated and too restrictive for a time of record-low borrowing rates and meager growth. The EU Commission intends to propose changes by year end.

Now a bloc of 27 members, we believe the EU will evolve, guided by its culture of consensus that was able to produce the desired outcome in the divorce negotiations with the UK. With resilient domestic demand underpinned by some fiscal support, we would expect the eurozone’s economy to eke out enough growth to generate mid-to-high single-digit corporate earnings growth.

With the STOXX Europe 600 ex UK Index’s undemanding price-to-earnings valuation of 14.3x based on 2021 consensus estimates and a dividend yield above three percent, there is room in portfolios for an allocation to well-managed European companies with strong business models and leading market positions, in our view. For example, we believe investors can find opportunities in the consumer spaces or the Industrials sector from companies positioned to benefit from structural trends, such as increased infrastructure spending, urbanization, and digitalization.