How is the scope of the outbreak evolving, and to what extent could the coronavirus sap Chinese and global economic growth?

The coronavirus (COVID-19) has again put fear into the heart of financial markets as the focus shifts from what appear to be diminishing risks within China to rapidly rising risks outside of the country, including to other major economies.

New cases in China are shrinking …

The spread of COVID-19 within China is slowing 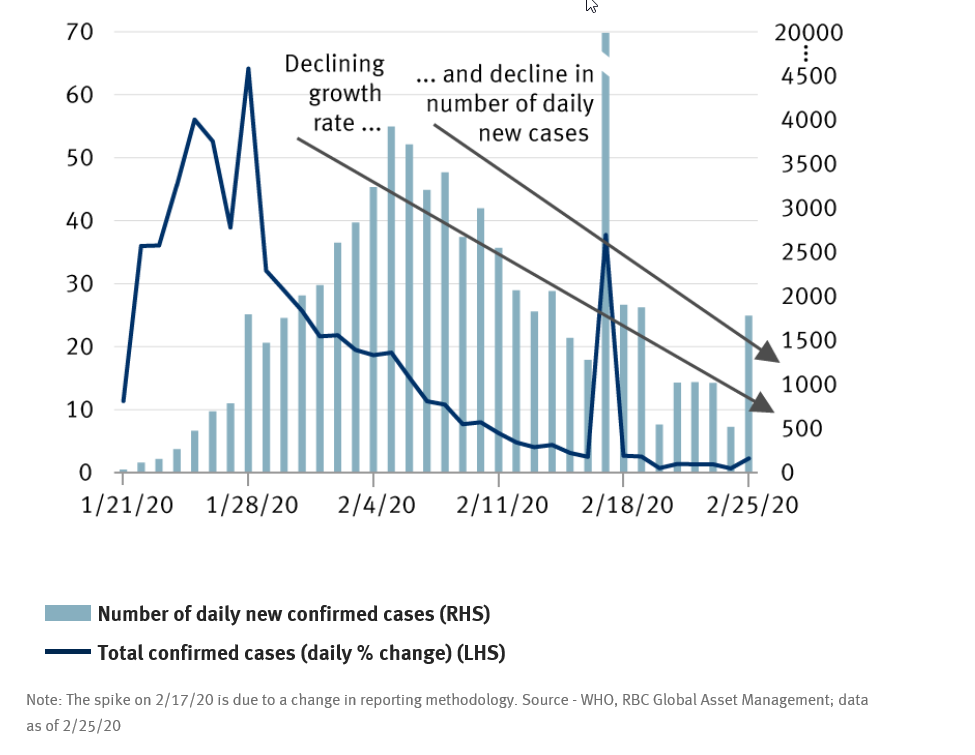 In fact, on a net basis, there are now more Chinese each day being declared newly free of the disease than are acquiring it. Fully 29 Chinese provinces and other administrative divisions—including Shanghai—reported no new cases in the latest data. President Xi Jinping has now called for a resumption of economic activity. Of course, it is possible that this tentative reset could drive the infection rate back up.

… but are things just getting started outside of China?

In contrast, the growth rate outside of China is still far from tamed. The number of new cases in the rest of the world jumped recently, with 3,505 added during the three days ending Mar. 1. Those new cases represent almost 50 percent of the total confirmed cases outside of China.

Granted, the disease made its way outside of China with a lag, so it makes sense that it is yet to be resolved in other countries. Furthermore, China is still host to the great majority of the overall cases. But China’s caseload growth was already beginning to slow after two weeks, whereas there is no sign yet of a peak in the rest of the world. 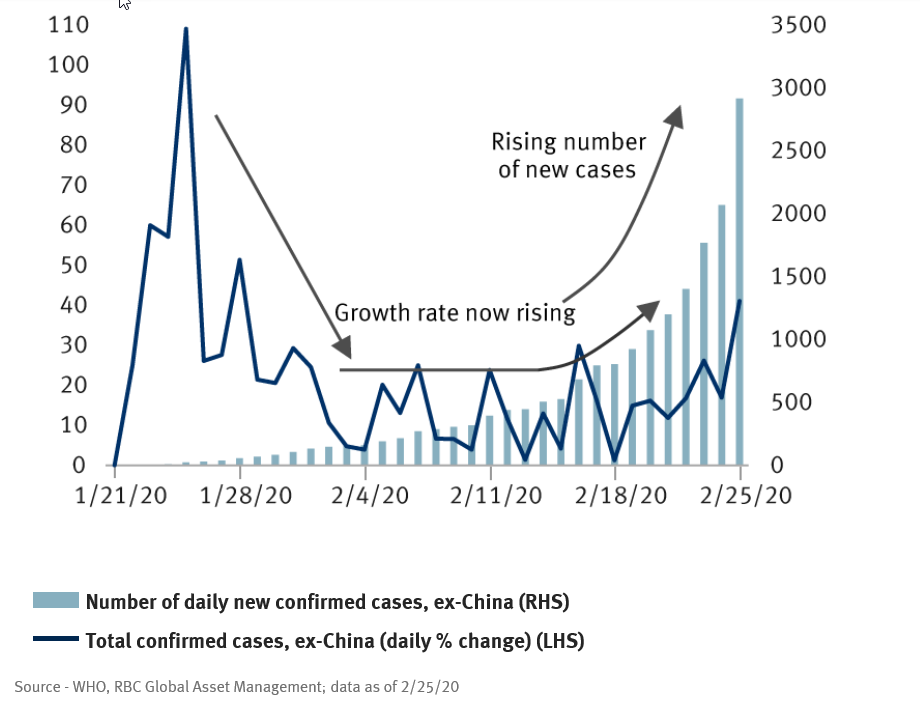 Outside of China, several countries are capturing particular attention:

South Korea: The country suddenly exploded to 3,736 cases, with 18 fatalities as of Mar. 1. The bulk of the cases have been acquired domestically, rather than via direct travel to China. The country placed some 7,000 soldiers under quarantine after a handful tested positive for the disease. We assume significant near-term economic damage to South Korea.

Japan: Until recently, Japan had the highest caseload outside of China, though much of this was from a quarantined foreign cruise ship (695 cases). Nevertheless, even without that group the country maintains 239 cases and is especially vulnerable not merely by virtue of its proximity to China but also due to its large elderly population (the disease disproportionately targets the old and infirm). We assume modest near-term economic damage to Japan.

Iran: The country has been a source of concern since a Canadian was reported to have contracted the disease in Iran rather than China, and the country has since admitted to 593 cases (though the official tally of 43 deaths suggests a considerably larger overall pool of infected). Schools, theaters, and sporting events have been reportedly shut down.

Italy: Lastly, and further hinting at the highly contagious nature of the disease and its ability to seemingly pop up nearly anywhere, Italy has suddenly leaped from three cases on Feb. 21 to 1,128 cases on Mar. 1, with 29 deaths reported. These cases are clustered within a region of 10 towns not far from Milan. Italy is attempting to impose a strict quarantine.

While wealthy countries have stronger health care systems, they also tend to be older—a predictor for the severity of infection. The U.S. and Canada find themselves slightly better off in this regard than Europe and Japan.

COVID-19 continues to progress according to our initial expectations: the fatality rate remains low, about 3.5 percent (2,977 deaths out of 87,137 confirmed cases globally), and the disease has proven highly contagious, as evidenced by the aforementioned cross-section of affected nations.

Perhaps the only twist is the extent to which the fatality rate has thus far proven highly variable. Outside of China’s Hubei province, the epicenter of the epidemic, the fatality rate appears to be considerably less.

Furthermore, the virus appears to discriminate aggressively based on age. The fatality rate so far is zero percent for young children, just 0.2 percent for those aged 10–39, and then incrementally rises to a large 14.8 percent for those aged 80-plus. For those below middle age, thus far it is arguably no more dangerous than the ordinary flu. For the elderly, it can be deadly.

All of this said, a point of comparison provides some calming context. The U.S. alone expects roughly 18 million cases of the flu this season. Even with a tiny fatality rate, this adds up to 14,000 anticipated deaths. Last year was unusually bad, with roughly 80,000 deaths in the U.S. alone. It would take a remarkable surge for the coronavirus to induce death on that scale, and yet we accept the annual fatalities associated with the flu with barely a remark.

Even as the caseload growth in China has slowed, businesses have remained shuttered to an even greater extent than we had initially envisioned. Surveys suggest Chinese businesses continue to operate well below their normal capacity a full five weeks since the virus began to significantly impede economic activity.

Even though we assume an incremental return to business over the coming weeks, it is hard for us to see Chinese GDP growth operating much above 5.0 percent in 2020. This is down from our prior forecast of 5.6 percent. Absent the virus, we would have forecast 5.9 percent growth for the year, slightly lower than the 6.1 percent rate in 2019.

At a more detailed level, it seems nearly certain to us that Chinese Q1 GDP growth on a quarterly basis will be substantially negative, and there is a good chance that year-over-year GDP growth will also be temporarily negative for the quarter before rebounding in later quarters. The monthly data in January and February will likely be particularly dismal, with property sales down by more than 90 percent already.

China seems set to absorb the bulk of the economic impact from the coronavirus, followed by the Asia region, but virus-related disruptions also will slow global growth.

A worst-case scenario would have COVID-19 ping-ponging around the world, forcing companies to shutter and impacting supply chains on a nearly worldwide basis. It is unlikely to be quite that extensive, in our view, but the coming weeks will reveal much and containment is no easy task.

Scenarios abound as to how the virus may ultimately be contained, be it warmer spring weather naturally dampening the disease, the possibility of lower fatality rates in the developed world that render it merely a super flu, or the eventual development of a vaccine.