Are energy prices more important than the U.S. debt ceiling?

Are energy prices more important than the U.S. debt ceiling?

While the U.S. debt ceiling gets headlines, we examine the key issues for investors in global energy markets and central banks’ inflation policies.

Just as things were coming to a head for two front-and-center issues, the debt ceiling in the U.S. and the parabolic rise in global energy prices, each was granted a reprieve this week—but neither received a long-term solution.

The debt ceiling: A waste of everyone’s time?

The U.S. government’s debt ceiling appears to serve no practical purpose beyond functioning as, at best, a political football, and at worst, a pressure point of economic and market consternation, as was the case in 2011 and 2013, and has been recently. Among the voices that have recently called for it to be done away with are Treasury Secretary Janet Yellen and business leaders including JPMorgan Chase CEO Jamie Dimon.

One could argue a lot of ink has been spilled over something as basic as the U.S. paying its bills. That said, the debt ceiling still exists and technically matters, and there were some notable developments this week.

Just days before the Oct. 18 deadline when the U.S. Treasury projected it would exhaust its extraordinary measures and, therefore, its ability to meet debt and interest payment obligations, Senate leaders from both parties agreed to vote on a deal that would temporarily raise the debt ceiling to $28.9 trillion, a $480 billion increase. This would allow the government to fulfill its obligations through early December, pushing out the default risk.

As the first chart shows, short-term Treasury bill yields—a measure of how seriously markets are taking the threat of default—dropped sharply when Republicans initially floated the idea, suggesting markets anticipated (correctly) that Democrats would agree to this short-term extension. During past debt ceiling episodes in 2011 and 2013, the rise in Treasury bill yields was most pronounced in the week just prior to a potential default, falling sharply back to normal levels after eventual resolutions.

Over before it started: Drop in yields suggests debt debate defused, for now 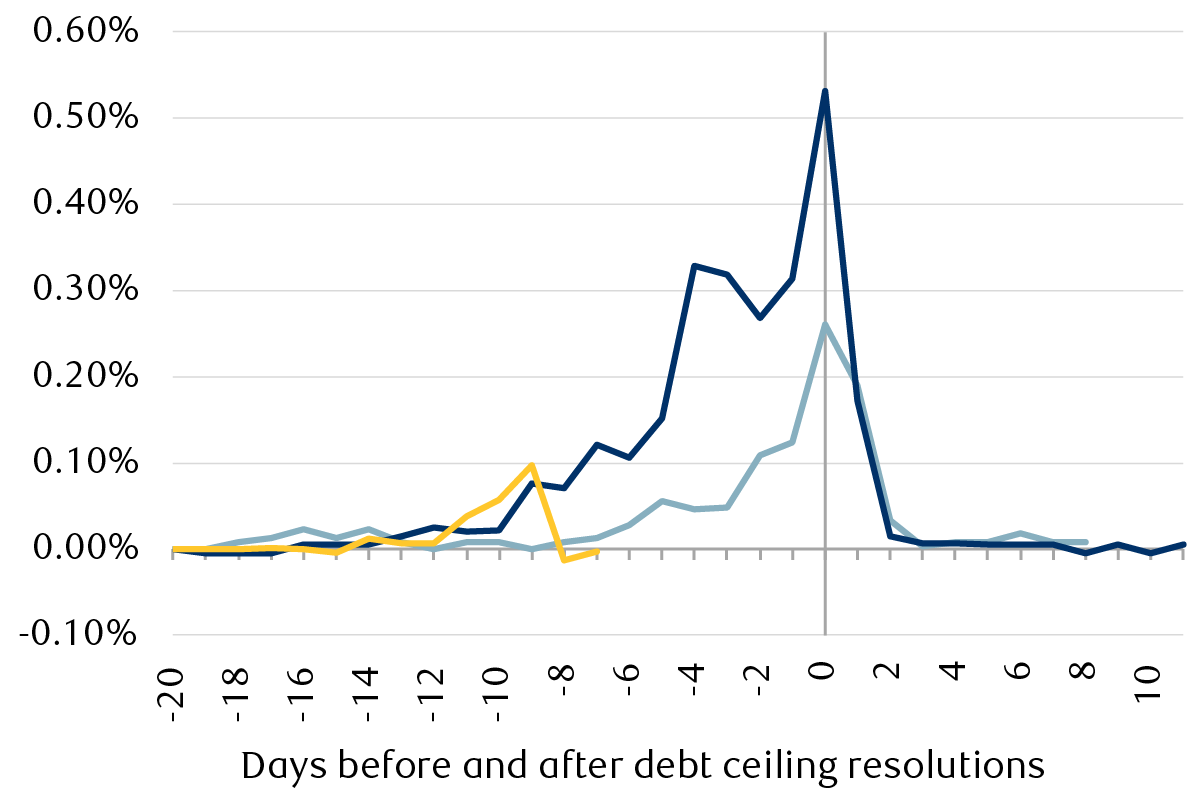 The big question is whether fixed income market participants will have to do this all over again in two months. Treasury bills that mature in December have already seen their yields rise modestly, suggesting markets see at least some chance of a repeat before the end of the year.

For now, we expect more legislative maneuvering and political jockeying. In regards to a longer-term agreement, Republicans still want Democrats to raise the debt ceiling on their own via budget reconciliation, which would force them to increase the limit by a set dollar amount. At this stage, it’s unclear if Democrats will go down that route, continue to seek a bipartisan agreement, or simply attempt to remove the filibuster rule for this bill.

The three C’s of credit

As a reminder, of the “three C’s of credit”—Character, Capital, and Capacity—the debt ceiling issue is far more about the character of the U.S. government and its willingness to pay its bills than about its ability to do so.

As Standard & Poor’s stated in 2011, prior to its downgrade of the U.S.’s AAA credit rating, “The political brinksmanship of recent months highlights what we see as America’s governance and policymaking becoming less stable, less effective, and less predictable than what we previously believed.” This point of view was echoed last week by Fitch Ratings, which noted that, “The debt limit impasse reflects a lack of political consensus that has hampered the U.S.’s ability to meet fiscal challenges for some time, and which is reflected in the Negative Outlook on the U.S.’s ‘AAA’ rating since July 2020.”

To be sure, we understand that some (perhaps many, maybe even most) investors harbor concerns about public debt levels in the U.S.—but the debt ceiling never has been, and never will be, the tool or means by which government spending is kept in check. It’s nothing more than a self-imposed statutory number that has been raised about 80 times since the 1960s, and we are confident it will ultimately be raised again.

Nothing shows more clearly that policymakers, market participants, and investors have better things to worry about than what has transpired in global energy markets over recent weeks and months. At one point this week, natural gas prices were up nearly 700% for the year in the UK, and nearly 200% over the past month, while gas prices in Germany were up nearly 400% year to date, before reports that Russia was prepared to boost its exports, with conditions, took some of the steam out of prices.

As the chart shows, global government bond yields have moved sharply higher, along with market-based inflation expectations, as soaring energy costs have introduced upside risks to the inflationary backdrop. Thus far, the U.S. has remained relatively insulated from rising natural gas prices, with inflation expectations largely unchanged. The rise in U.S. yields has been driven more by changes in Fed policy expectations. 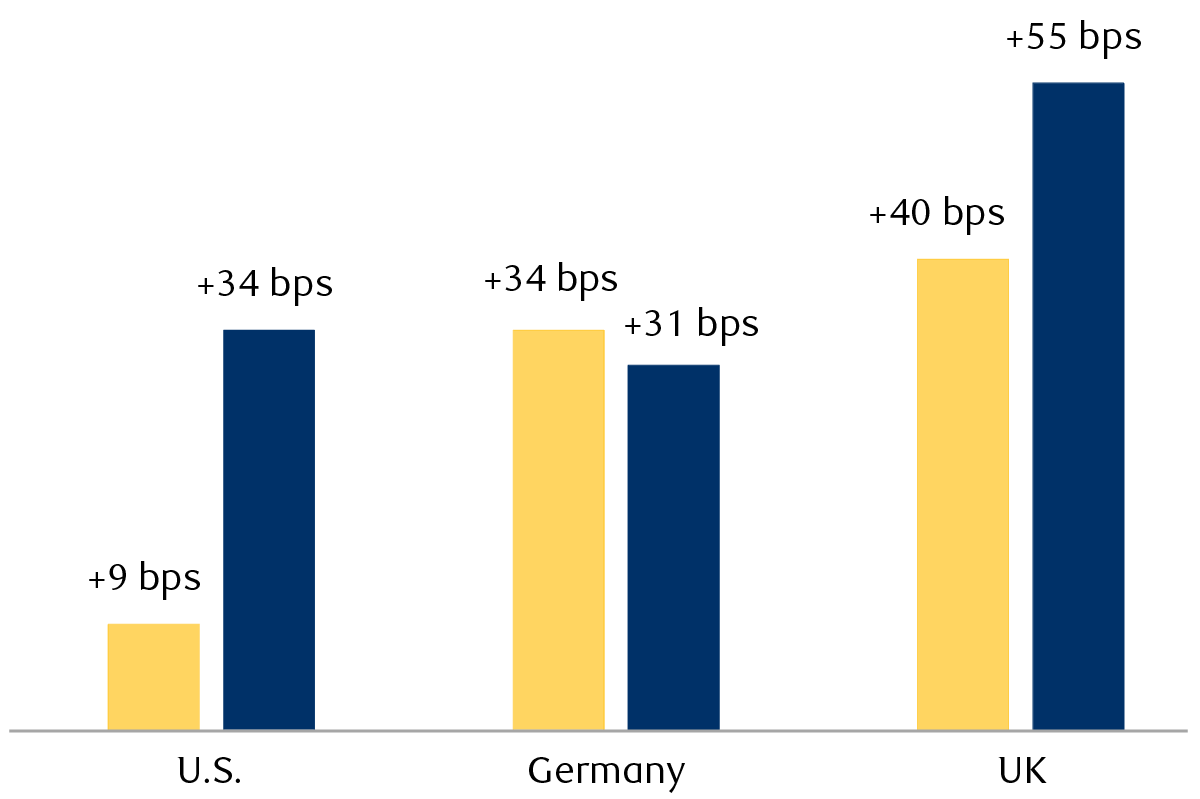 Are higher natural gas prices coming to the U.S.?

Natural gas prices are up sharply this year in the U.S., by about 125%, but have thus far lagged the global energy crunch. Natural gas remains largely a regional commodity, and as is the case with most commodities, its price tends to be driven by regional factors and forces more than by global factors.

RBC Capital Markets’ commodity strategy team raised its natural gas price forecast for the U.S. market this week. But in the final analysis, the price estimates remain at conservative levels as the team noted there is a limit to U.S. natural gas exports, which should keep U.S. prices in check by limiting any convergence with global price levels.

The omicron variant: A heavy dose of uncertainty

Many questions surround the newest COVID-19 variant, but if history is any indication, its market effect may not be one of them.