The activation of a key recessionary tripwire portends a new phase for equities; investors may need to get more defensive in coming months.

During the past 10 years of the U.S. economic expansion and equity bull market, none of our major U.S. recession tripwires were activated. The indicators remained in the green despite temporary slowdowns and through periods of overseas instability, signaling that the economic expansion would persist and, in turn, would provide a firm foundation not just for the U.S. equity market but for global stock markets as well.

Since the end of the Great Recession in 2009, tracking these persistent signals has enabled us to stay fully invested in equities for all but four of 122 months, and to avoid the distractions of normal pullbacks and corrections. We reasoned that, as long as the U.S. economy seemed set for continued expansion, we could take market volatility in stride and keep equity weightings at a benchmark level or higher in portfolios. The S&P 500 Index has almost tripled during this period.

But the economic terrain is shifting. One of our six recession indicators—the yield curve—is now flashing red for the first time in the current expansion cycle. Another indicator that tracks the manufacturing sector—ISM New Orders minus Inventories—just shifted to a yellow cautionary signal. 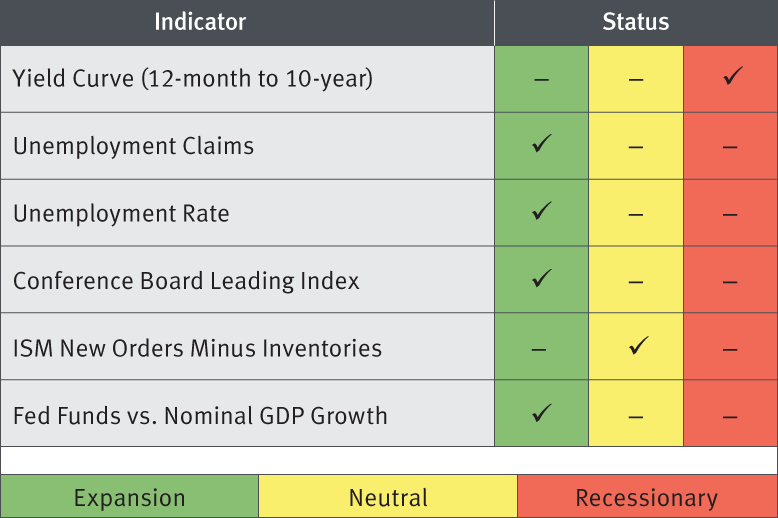 The yield curve indicator has shifted to red and another indicator to yellow, signaling to us that recession risks have risen. However, our other four are still signaling economic expansion—for now.

With short-term Treasury yields higher than the 10-year note yield, and the gap between the two widening, the yield curve inversion has become more pronounced. The two year to 10-year portion of the curve briefly inverted in August, and we think the gap could widen. Historically, these yield curve movements have been harbingers of a recession arriving a year or so in the future.

These changes come at a time when the U.S. economic expansion is, admittedly, long in the tooth. Weak trends in Europe and Asia, notably in Germany and in China, are weighing on global growth. So too is the trade dispute between the U.S. and China with both sides layering on additional tariffs and more aggressive rhetoric. The longer the trade battle persists, the greater the risk that more consumer confidence data could erode and business confidence could sink further, all to the detriment of not just the global economy but, potentially, the U.S. domestic economy as well.

These developments have led us to become incrementally more cautious about equity positioning, with an eye toward recommending more defensive adjustments to portfolios in coming months.

Hazardous curve, or just a curveball?

Reasonable arguments can be made that the U.S. economic expansion and bull market can continue for some time. Our four other recession indicators are still in expansion mode, while the all-important consumer spending remains healthy, supported by steady wage growth and the confidence that comes with a tight labor market.

Importantly, households and businesses still have easy access to credit as banks remain willing to lend. The Fed’s most recent Senior Loan Officer Opinion Survey revealed that banks continue to ease lending standards for most types of business and mortgage loans. The latest monthly survey of small and medium-sized businesses by the National Federation of Independent Business found that, as has been true for several years, only a very small percentage of respondents (three percent in July) reported that not all their credit needs were met. Only two percent reported that their latest loan had been harder to get than the previous one.

Yield differential between the U.S. 10-year and 1-year Treasury (percent) 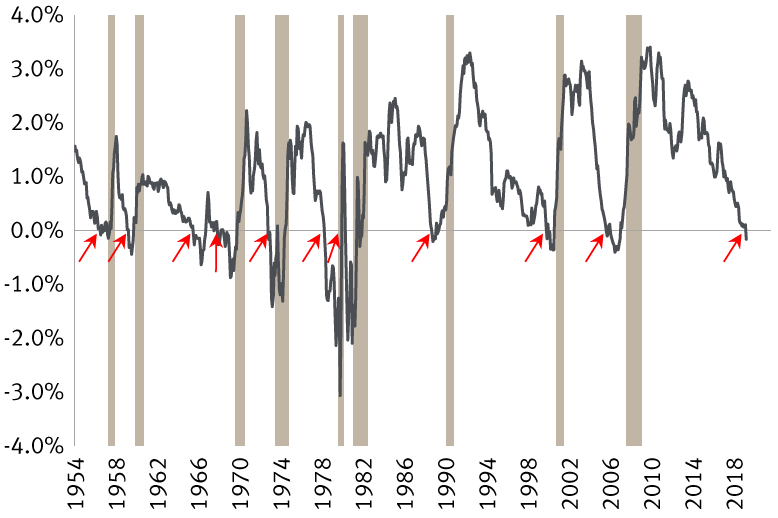 The yield curve has inverted for the first time this expansion cycle. This is a cautionary signal as all but one previous inversions preceded a recession.

Furthermore, there are circumstances in place that may make the Treasury yield curve a less valuable signal today. Some argue it is more reflective of global growth concerns than domestic U.S. risks, and that the present inversion is a technical anomaly reflecting a global stampede to the perceived safety of Treasuries, which offer relatively high yields compared to the $16T in negative-yielding sovereign bonds worldwide, especially in much of Europe and Japan.

As has often been the case during yield curve inversions, well-reasoned and compelling arguments like these are being offered in support of the thesis that yield curve inversion no longer matters—or, at least, that it doesn’t matter this time. But when the U.S. economy begins to shift from expansion to contraction, there are almost always “unique” circumstances that can be cited to explain away the warning signals. Typically, recessions arrive nonetheless.

The yield curve has a track record as an economic indicator that is hard to ignore. It is usually the first of our indicators to flash a recession warning. But the “inversion signal” has always been hard for investors to get behind, precisely because it typically provides such a long early warning. An inversion is usually followed by several quarters of positive economic growth—the last such interval lasted almost two years.

On average, the yield curve has inverted 14 months before each of the last nine recessions since 1950. Only one false signal was given: in the mid-1960s, when the curve inverted but no recession materialized, although GDP growth slowed sharply to a standstill.

The S&P 500 has peaked about six months after each yield curve inversion, on average. But this is not a reliable market timing mechanism because the gap between inversion and market peak has varied widely, with the shortest occurring two months before inversion and the longest gap stretching to 21 months after inversion. On a number of occasions, the S&P 500 reached new highs after the yield curve inverted, and then shifted into a bear market before or during the ensuing recession.

A broader view of recession risks

Until just a few months ago, our other four recession indicators were unequivocally signaling no recession in sight. Today, while none of them have flipped, all of them are closer to doing so than they were months ago. 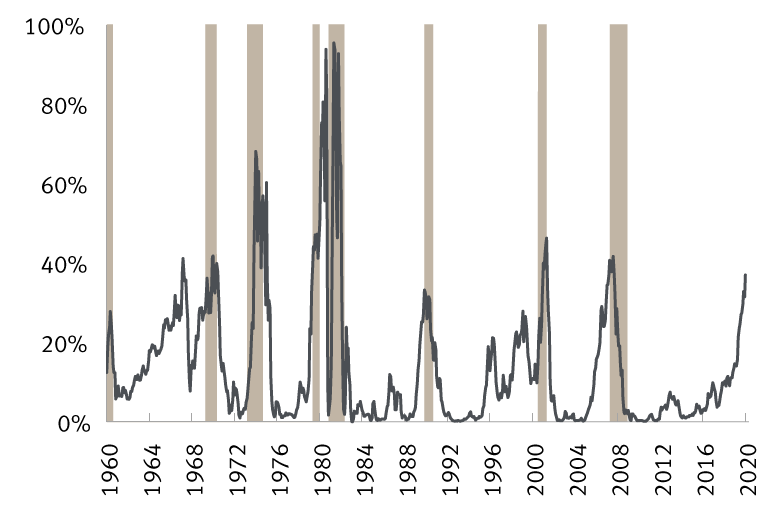 If we were to rely on one indicator, the yield curve (and we don’t, we rely on six indicators), the New York Fed calculates a 37 percent probability of recession one year from now.

None of these six indicators has a perfect track record—although some come close. And even if one indicator had performed perfectly to date, there’s a first time for everything. But looking at these indicators as a group, rather than individually, has given us a reliable picture of how the recession probabilities are shifting.

With the yield curve indicator now flashing red, the manufacturing reading at yellow, and some indicators showing the potential to shift in the months ahead, we think some additional caution is warranted.

While the S&P 500 could conceivably reach another all-time high, as it has after some of the previous yield curve inversions, we think the market has entered a new phase. In one important respect, and within the historical context, the inverting of the yield curve can be seen as opening the door to the arrival of a potential bull market peak for the first time in 10 years. We believe the risk-reward balance for global and U.S. equities will shift to less favorable terms as more recession indicators start to flash caution signs. Once the economy’s path shifts decisively toward an eventual U.S. recession, a more cautious and defensive approach to U.S. and global equities will be called for.