We are upgrading our stance on European equities to Market Weight from Underweight as several key developments appear to be afoot on the continent.

Two events in particular mark a departure from the status quo. First, the EU’s joint response proposal to lend a hand to those countries most affected by the COVID-19 crisis suggests a step towards greater fiscal union. Second, Germany has shed its parsimonious past and is embracing fiscal spending. What’s more, both of these are happening amid a backdrop of very accommodative monetary policy from the European Central Bank (ECB). 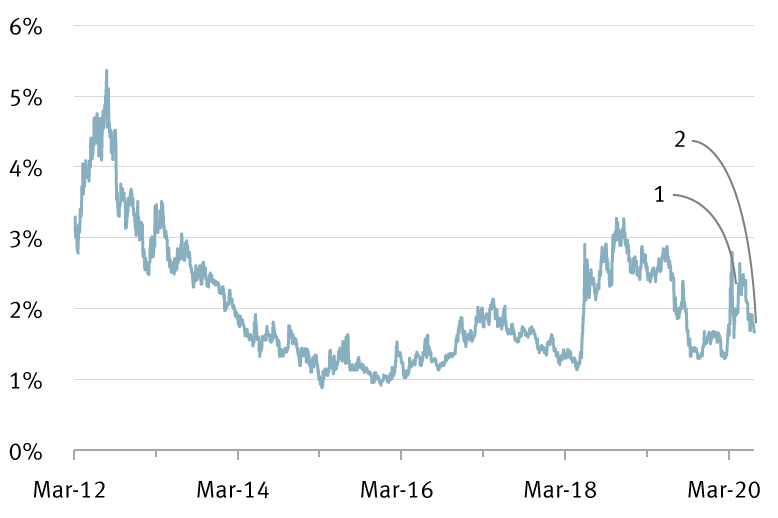 According to an old adage, crises tend to focus minds. This has certainly been borne out across Europe. In March, Northern Italy became the initial epicentre of the COVID-19 crisis, with new daily cases spiralling out of control. Lockdowns were imposed as the virus swept across the continent.

National governments responded swiftly by announcing spending programmes, some of them particularly ambitious, to support their respective economies. The ECB announced a new quantitative easing programme.

But financial markets were underwhelmed. The risk was that without a collective EU-wide response, the lack of apparent solidarity for those countries most affected by the crisis could fuel anti-EU sentiment. After all, why give up control of your domestic currency and abide by EU rules if you’re going to be abandoned in a time of distress?

European leaders seem to have heeded those calls to action and understood the precariousness of the situation. The confluence of three recent decisions may well prove to be a game changer for the region.

After much dithering, the European Commission proposed a €750 billion fund (or more than six percent of EU GDP) to bolster the recovery in the hardest-hit regions. The proposal, backed by the considerable clout of France and Germany, marks a pronounced change in attitude for Germany, which so far had been reluctant to use its savings for the benefit of the wider EU.

As proposed, the fund would boost the seven-year 2021–2027 EU budget, offering some €500 billion in grants and €250 billion in loans. This joint response comes on top of the significant stimulus that national governments already injected into their economies early in the crisis and the substantial monetary stimulus of the ECB.

The proposal is a step towards risk sharing and a deeper fiscal union as the European Commission aims to issue bonds at the pan-European level. These would be repaid over the long term by revenues generated from new taxes and levies targeting carbon emissions, single-use plastics, and digital firms.

However, the proposal remains very much a starting point, in our view. While it has been agreed to in principle, there are many points of contention, including the fund’s size, the split of loans and grants, and how to tie grants to requests for economic reforms.

Negotiations among all EU members are taking place over the next few weeks. With Germany assuming the six-month rotating presidency of the EU, German Chancellor Angela Merkel seems intent on pushing the proposal through. That she is enjoying high popularity at home and has earned much respect on the continent for successfully containing the health crisis, given Germany’s particularly low death toll, should also help her cause. Ultimately, we expect a slightly watered-down version of the proposal to be adopted.

The event which has most surprised financial markets is Germany’s volte-face on its austere fiscal stance. The country’s steadfastness at maintaining fiscal austerity has long been considered by the market as being one of the root causes of Europe’s meagre economic growth.

In June, Merkel announced a second stimulus package worth close to four percent of GDP, this one aimed at kick-starting Germany’s recovery. This comes after a first package of a similar amount was announced in March. These cash injections were accompanied by other measures including loan guarantees amounting to more than 30 percent of GDP. Such a 180-degree change in Germany’s fiscal culture was unimaginable at the start of the year.

The ECB as a backstop to the economy

All of this is occurring as the ECB is ensuring liquidity flows in the European financial system. After an initially timid, insufficient, and disappointing response to the crisis, as well as clumsy communication that caused spreads between 10-year sovereign bond yields in the periphery and Germany to balloon, the ECB upped its Pandemic Emergency Purchase Programme (PEPP) by €600 billion in June, bringing it to €1.35 trillion or some 10 percent of euro area GDP.

The ECB’s latest move was more aggressive than widely expected, not only by its size but also by extending the duration of the PEPP purchases through at least mid-2021. Moreover, ECB President Christine Lagarde stressed that the central bank will conduct net asset purchases until it “judges that the coronavirus crisis phase is over,” thus promising that the ECB will be there should a second wave hit the economy.

Investors have long been critical of the euro area’s lack of common fiscal policy to accompany its common monetary policy. They have also pointed fingers at Germany’s fiscal rectitude. But the relevant authorities now seem to have addressed both issues. Accordingly, we are upgrading our stance on European equities to Market Weight.

These recent developments are indeed promising, in our view. As a result, spreads between 10-year sovereign bond yields in the periphery and Germany have narrowed while the euro has strengthened to a 12-week high against the U.S. dollar. Yet the region still faces a very deep recession, with GDP likely to contract by over 10 percent this year, according to RBC Global Asset Management Inc. Chief Economist Eric Lascelles. Economic activity indicators such as Purchasing Managers’ Indexes have recently bounced back forcefully, but it is still too early to declare the region will enjoy a “V-shaped” recovery. Lascelles foresees growth of 3.6 percent in 2021.

Nevertheless, prospects are now looking brighter as these developments should buttress the recovery. Within European equities, we continue to favour the Health Care sector, whose outlook should be underpinned by ageing demographics and rising global health care expenditures, as well as renewables-focused utilities as governments look to stimulate their post-COVID-19 economies with an increasing focus on green and sustainable investments.

We are also mindful that Europe offers rich hunting grounds for “quality cyclicals.” We believe select companies in the Industrials sector that benefit from secular trends are attractive. Meanwhile, the long-term fundamentals of the luxury and sporting goods categories within the Consumer Discretionary sector also appear structurally attractive, although near-term risks exist.