While the UK is not dependent on Russian gas, which represented just four percent of total UK gas supply in 2021, the country is heavily dependent on the fuel in general and is suffering from the high prices set in international markets. Natural gas represents more than 40 percent of UK energy usage. Moreover, the 2017 closure of the UK’s largest storage facility left the country in a precarious position. Remaining storage capacity of a mere 1.5 billion cubic meters, according to Ofgem, the UK’s energy regulator, is insufficient for a country that consumes 77 billion cubic meters of natural gas annually.

Households are feeling the crunch of higher energy costs. On average, a household with income of £31,400 saw its energy bill increase to £2,500 currently from £1,339 last year. It was set to increase to £6,000 by next summer according to Cornwall Insight, a consultancy, a crippling level for many households and businesses.

Higher energy prices, coupled with soaring food prices and supply chain disruptions, conspired to lift UK inflation to 9.9 percent year over year in August, the highest level of G7 countries. The Bank of England (BoE), worried it would peak much higher, was one of the first central banks to take action in Q4 2021. The base rate increased to 1.75 percent from 0.1 percent in just eight months. The country is heading towards recession if it isn’t already in one. Q2 GDP contracted by 0.1 percent, and sterling has fallen by 14 percent against the dollar and by 3.5 percent against the euro since the beginning of the year, despite the BoE’s interest rate increases.

Amid this economic crisis, former Prime Minister Boris Johnson resigned. During the conservative leadership campaign, Liz Truss (now the prime minister) campaigned on reforms and tax cuts and appeared little concerned about fiscal rectitude. Anyone who doubted her didn’t have to wait long to see proof of her conviction as she announced a bold, if blunt, support package within days of her ascension.

Truss announced a package to cap the average annual household energy bill at £2,500 for two years. Similar, though as yet unquantified, guarantees were given to businesses and public bodies such as schools—for only six months, although extensions may be possible. A £40 billion liquidity facility for energy suppliers struggling with collateral repayments will also be made available.

The package is expensive because it is universal, covering both high- and low-income households. Targeting only the most vulnerable would have been less expensive. Though the final cost will depend on future wholesale energy price moves, initial indications of a two-year cost of £125 billion–£150 billion, or some six percent of GDP, suggest a higher price tag than that associated with the UK banks bailout during the global financial crisis (£133 billion), and more than twice that of the pandemic’s furlough scheme (£70 billion) which ran for 18 months. The package, combined with promised tax decreases including a cut in National Insurance Contribution and rolling back the planned corporate tax increase to 25 percent from 19 percent, measures worth just over one percent of GDP, represent a very sizeable fiscal expansion.

Details of the financing are still scarce, which is unusual for a package of this size, and should emerge along with a mini emergency budget later this month. Swelling national debt levels should not be a surprise following Truss ruling out windfall taxes on energy companies.

We think the package removes some important downside risks to growth in the short term. Any upcoming recession may be shallower than would have otherwise been the case. With the energy bills capped, we think inflation will likely peak sooner and lower than the Bank of England’s expectation of a 13 percent peak by the end of the year.

However, offering such a large stimulus package at a time inflation is so high, may incentivize the BoE to continue to hike rates aggressively. Markets currently expect peak interest rates beyond 4 percent, a level which would likely crimp future growth.

Moreover, the package, by freezing prices, also removes the incentive to reduce consumption. To the extent that high natural gas prices are due to a shortage of the commodity, the possibility of blackouts in the winter remains. The government’s measures to increase supply by lifting a ban on fracking and increasing drilling in the North Sea are not likely to have any immediate impact on scarce energy supplies, in our opinion.

Beyond the immediate emergency measures to help the country navigate what promises to be a treacherous winter, Truss’ programme aims to raise the UK’s growth to 2.5 percent, from the Office for Budget Responsibility’s expectation of 1.7 percent, by lowering taxes and deregulating.

Rolling back the proposed increase in corporate tax to 25 percent from 19 percent may help, although the UK already has the lowest tax rate of the G7 by far. As for deregulation, efforts may be constrained by free trade agreement requirements.

Getting this right is important to unleash growth as business investment has not returned to trend growth since the 2016 Brexit vote, nor has it bounced back to the pre COVID-19 level. A stable and clear regulatory environment would also help, as would a less volatile relationship with the country’s largest trading partner, the EU. 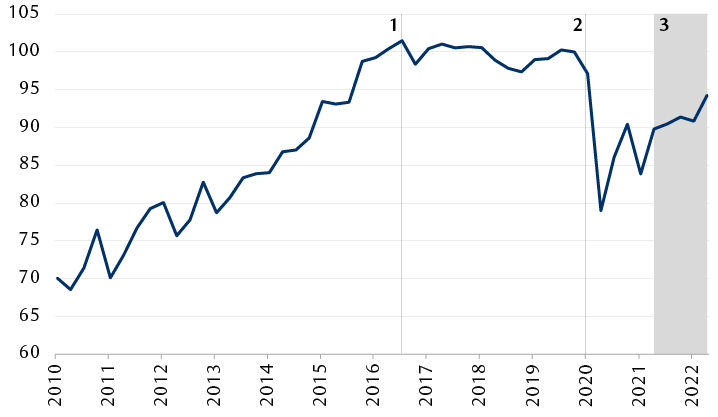 Given the challenges ahead, we think it is prudent to take some profit in UK equities, which have outperformed year to date in local currency terms. We recognize the overall FTSE All-Share Index remains very cheap on an absolute and relative basis, at less than 10x next year’s earnings estimate. UK equities also offer the highest dividend yield among the major regional equity markets (FTSE All-Share: four percent), a feature that may be very relevant for UK-based income-focused investors.

We maintain our strong preference for internationally-orientated companies and remain cautious on UK domestics. We continue to have a strong bias to quality, resilient companies, with market-leading competitive positions and strong balance sheets. Within cyclicals, we believe there are select opportunities in companies whose valuations already largely reflect short-term recession risks but remain well positioned for medium- to long-term structural trends, such as the decarbonisation of the economy.