On Dec. 20, the Bank of Japan (BoJ) announced it would relax its yield curve control (YCC) policy, in effect enabling the Japanese 10-year bond yield to reach 0.50% (previous cap 0.25%). Markets did not expect such a move so soon.

In September 2016, under Governor Haruhiko Kuroda, the BoJ instituted the YCC policy to ensure the 10-year Japanese Government Bond yield would remain around zero. By 2021, it had committed to keeping that yield within a band of 0.25% above or below zero, through transactions in the bond market.

At the time, the BoJ’s overwhelming concern was to fight deflation. The YCC policy was designed to prevent yields from turning deeply negative, a situation that would have endangered the already fragile banking sector.

YCC has been “a broadly successful policy to date” according to RBC BlueBay Asset Management. Inflation has returned to Japan, reaching 3.8% in November 2022, comfortably above the BoJ’s 2% policy target, and the economy is picking up momentum as it reopens following COVID-19 restrictions. The BoJ expects above-trend GDP growth for 2023. Thus, the pressure is on for bond yields to rise and for the policy to be more about capping yields rather than preventing negative ones. The BoJ’s December announcement in effect replaces the 0.25% cap on yields by a higher, easier-to-defend 0.50% cap.

The move comes as Kuroda is scheduled to step down in April 2023, after a 10-year tenure. While his signature policy was widely expected to be abandoned then in light of the country’s emerging inflation and return to growth, we think it makes sense for the change to take place now. Such a move by a new, unproven team may have been tested by markets, resulting in undesirable market volatility. According to RBC BlueBay Asset Management, it was “responsible of Kuroda to begin the process now and ensure a seamless transition next April.” 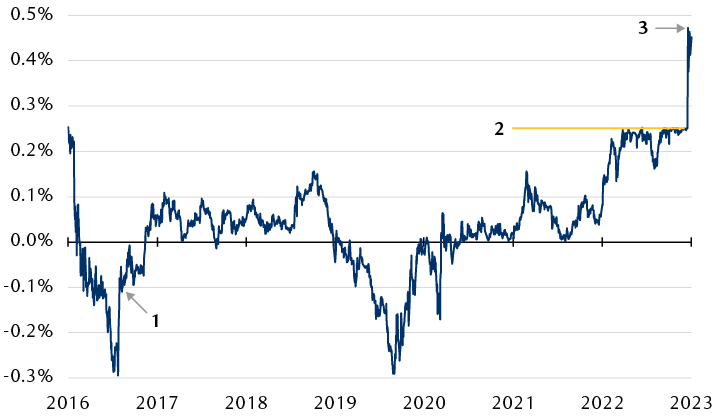 Line chart showing the 10-year yields for the Japan Government Bonds (JGBs) since January 2016. It illustrates that the Yield Curve Control policy, introduced in September 2016, was broadly successful in helping 10-year JGB rates remain within a tight band around zero. By mid-2022, with inflation having returned, yields were pressing up against the 0.25% cap. When the BoJ lifted the cap, yields rose to close to 0.50%, the highest level in more than seven years.

The beginning of the end?

Investors will now wonder whether the higher cap marks the onset of a more aggressive stance for the BoJ. They are understandably nervous given the precedent recently set in Europe. In December 2021, after European 10-year yields had been below zero for close to three years, European Central Bank (ECB) President Christine Lagarde stated emphatically that it was “very unlikely” that interest rates would go up in 2022. In fact, 2022 marked the ECB’s most aggressive rate cycle in its 24-year history, with rates up 2.5% within five months. Hence, BoJ Governor Kuroda might have difficulty convincing investors that further policy normalization is not on the way, particularly given the upcoming change at the helm of the BoJ.

Investors will watch very closely the Shuntō annual wage negotiations over February and March, during which thousands of unions will negotiate with employers simultaneously. The Japanese Trade Union Confederation is seeking a pay hike of some 5%, its highest target in more than 25 years. A wage hike above the current inflation level could trigger further moves away from YCC policy.

RBC BlueBay Asset Management, given the healthy pace of economy growth and inflation pressures, expects the BoJ to further revise its yield ceiling to 0.75% from 0.50% by March, before eventually abandoning YCC altogether later in 2023. Hence, Japanese yields are likely to continue to rise in the medium term, in its view.

Recent actions by the BoJ might seem only relevant to a remote market. However, that would overlook that the BoJ is the world’s third-largest central bank. RBC BlueBay Asset Management explains that monetary stimulus in Japan has added to global liquidity over the past several years and has been a factor in pushing yields lower across the globe. In this context, as this policy starts to reverse, it could contribute to causing global yields to rise, particularly as the move is happening at a time bond markets have been shaken by ongoing hiking cycles. This vulnerability was on display during the quasi run on UK sovereign bonds last fall.

To illustrate, the BoJ policy change, on the heels of hawkish Federal Reserve comments and an aggressive ECB meeting in December, seems to have led the 10-year Treasury Inflation Protected Securities (TIPS) yield, the market’s estimate of the 10-year real yield after inflation, higher. The TIPS 10-year yield had plateaued from the end of September and fell in November as market expectations increased that the interest hiking cycle could soon near an end. But with the BoJ joining the hawkish fray, any hopes for a dovish turn from central banks appear to be on hold.

Another way to look at it is that if the BoJ moves away from its very loose monetary policy and Japanese yields creep up and become more attractive, it could eventually lead Japanese investors to sell their foreign bond holdings in favour of domestic bonds. French bonds, which have been popular with Japanese investors, may be at risk in this scenario.

There are also implications for currencies. After the policy announcement, the yen, which had been chronically weak for most of 2022 due to the BoJ ultra-accommodative policy, surged by close to 4%, achieving its largest daily gain against the U.S. dollar this century.

The yen’s move adds credence to the widely held view, including our own, that the U.S. dollar’s strength would likely wane over 2023. This, in turn, could remove an important headwind to emerging economies which typically suffer from a strong dollar as they tend to borrow in U.S. dollars.

Equities – The way to invest in Japan

While we are currently cautious on Japanese fixed income as domestic monetary policy changes, we find Japanese equites attractive. We think they should benefit from the rebound in the domestic economy while the return of inflation has led to a sea change in corporate pricing behavior as businesses start to adjust prices upward for the first time in decades. Moreover, Japan would benefit from the reopening of China, which receives more than 20% of its exports. The Japanese yen remains relatively weak despite its recent strength, a further tailwind to corporate earnings at least in H1 2023. Finally, we note that Japanese stocks rose following the past two YCC changes in 2018 and 2021. Risks to our outlook include a hard landing in the U.S. and a slower-than-expected reopening of China.