The continuing global rise in interest rates has strong foundations in the market’s growth expectations, as improving economic data and rising vaccination rates reduce demand for low-risk government debt. We believe the move is sustainable and reasonable given the improved economic trajectory.

At the same time, concerns that the rise in longer-term rates could presage a near-term tightening of the Federal Reserve’s monetary policy are misguided, in our view. Investors should also keep in mind the market forces that will likely help offset some of the upward pressure on longer-term rates even as the economy recovers.

Rising inflation expectations have partly fueled the recent drop in bond prices, as investors confront the potential simultaneous arrival of $1.9 trillion in fiscal stimulus and the large-scale return of consumers, flush with an extra $1.6 trillion in savings after pulling back from pre-pandemic spending levels. The potential combined demand increase is equivalent to 16 percent of U.S. GDP. As a result, relatively small shifts in estimates of vaccination rates and consumer confidence can have outsized effects on inflation projections. The impact on Consumer Price Inflation (CPI), which is reported on a year-over-year basis, is magnified by the comparison to a 2020 economy that was largely shut down.

The Fed is not likely to place any real weight on these outsized inflation reports when setting policy, in our view. The underlying economic events are non-recurring, and constitute necessary steps in the economic recovery the central bank is working hard to engineer. And while expectations for near-term inflation have increased sharply, we see little evidence that inflation expectations are hardening at a level the Fed would find troublesome. The Fed’s preferred gauge of inflation expectations—the market’s expectation for annual inflation over a five-year period starting five years in the future—is at only 2.3 percent, an unexceptional level by historical standards, and entirely consistent with the Fed’s average two percent inflation targeting regime. 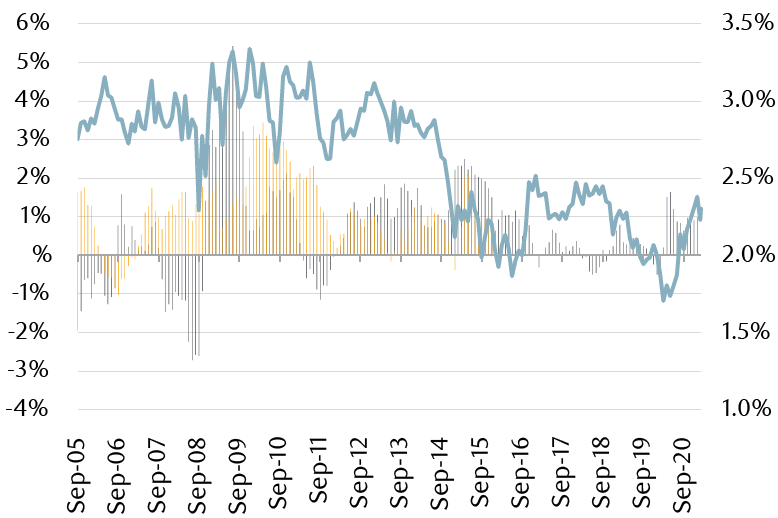 By statute, the Fed is mandated to maximize employment while keeping prices stable and long-term interest rates moderate. Today, prices are indeed stable and long-term rates moderate, but employment is far from maximized: the U.S. economy currently provides 10 million fewer jobs than it did before the start of the pandemic; the unemployment rate is almost three percent higher than it was a year ago; and the long-term unemployed now account for 40 percent of all jobless workers, the highest level since 2008. In light of this mandate, we see no cogent argument today for the Fed to shift to a tighter monetary policy stance, particularly as the market-led rise in rates has already tightened financing conditions across the economy.

One policy option the Fed may choose is to relaunch Operation Twist, which involves selling short-term assets like T-bills and reinvesting the proceeds into longer-maturity Treasury bonds. The policy would have two major benefits from the Fed’s perspective. First, it would send a strong signal to the market on long-term rates. Yields on the 10-year Treasury bond are a benchmark for many corporate investments, so slowing the rate rise there could help the Fed achieve its larger employment and growth goals. Second, Operation Twist could help avoid potential problems in short-term money markets. The Treasury Department’s recent decision to spend down existing cash balances instead of issuing new T-bills has raised concerns about the availability of short-maturity, risk-free assets for money market investors. The Fed could replace some of the missing supply by selling off its holdings.

Fed may twist curve back into shape 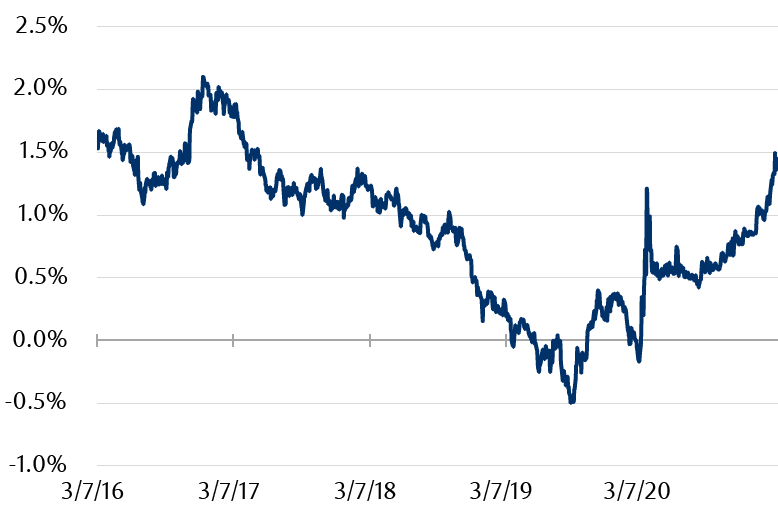 Note: The chart shows the difference in yield between a U.S. Treasury bond maturing in 10 years and a 3-month Treasury bill.

Given the potential dual benefits of Operation Twist, we would not be surprised to see at least a discussion of the strategy at the Fed’s next meeting, scheduled for March 16–17.

Even without direct Fed intervention, there are downward forces on long-term interest rates. One is the potential for persistent low inflation. Zero interest rates and balance sheet expansion have been empirically tested across developed markets since 2008 without creating consistent, on-target inflation. The benefits of these monetary policies have flowed primarily to higher-income savers, while inflation is based on the consumption basket of the average American, who relies on wages for spending. Without an increase in wage income, it is difficult to see sustained upward price pressure.

Rising long-term Treasury rates also impact the federal budget. U.S. government debt is at 127 percent of GDP, the highest level since World War II. If the Treasury Department were forced to pay 2018-level interest on today’s record debt load, almost $160 billion annually would be redirected towards debt service. Shifting resources from spenders to savers in this way would tend to decrease long-term interest rates.

Finally, higher U.S. Treasury yields also draw in foreign investors. Although the most recent Treasury Department data on foreign bond holdings is from December 2020, we know that as of mid-February the Federal Reserve was holding more than $3 trillion in Treasury securities on behalf of foreign official and institutional investors—the largest total since early 2018. As yields increase further, we would expect additional foreign purchases to help temper any rise in interest rates.

This article was originally published in the Global Insight Weekly with the title “Will the Fed twist the yield curve?”