One year later: How the economic recovery is taking shape

While it will still be a long way back, the recovery is exceeding expectations. We look at where things stand for key regions as they reset growth.

Even though some sectors continue to suffer from the scarring effects of the pandemic, the global economy is faring better than many had feared. Not only has economic activity rebounded enthusiastically on partial reopenings last autumn, but the second wave of the virus has taken less of a toll on activity than the first, as people and businesses have adapted to life in a COVID-19 world.

Eric Lascelles, chief economist at RBC Global Asset Management, Inc., points out that while economic activity in Q1 may not be as widely above consensus expectations as it was in Q4 2020, it remains positive, signalling the recovery is exceeding projections. 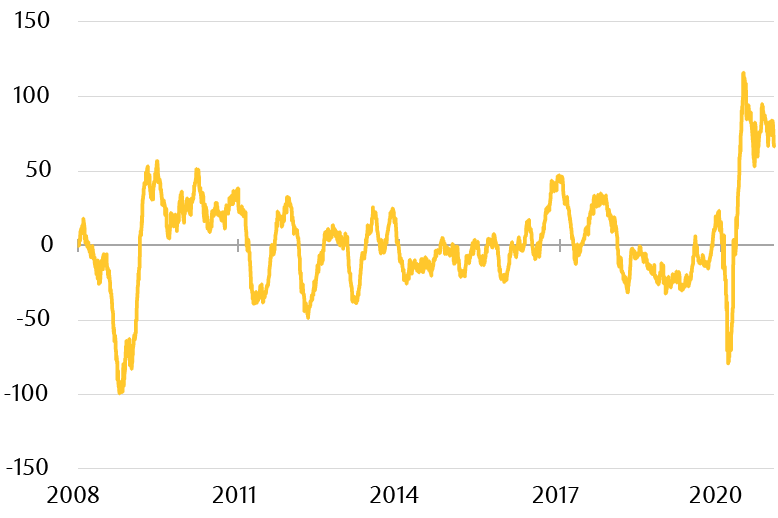 We look at the particular contours of the recovery for the main regions that we monitor.

President Joe Biden’s $1.9 trillion relief package aims at supporting the economy, but some question whether this full amount is needed given the strength of the U.S. economic recovery.

The U.S. economy is bouncing back strongly with labour market data pointing to as many as 379,000 jobs created in February. The ISM Manufacturing Purchasing Managers’ Index strengthened to a robust 60.8 in February while the services component continues to be firmly in expansion territory.

Yet pockets of weakness remain. Forty percent of people out of work are now labelled as “long-term unemployed,” the highest level since 2008. Lascelles points out there are also unresolved credit issues, such as 2.7 million mortgages in forbearance expiring in Q2.

While support is clearly needed, $1.9 trillion of stimulus—close to 10 percent of GDP—looks somewhat overly generous given the country’s already heavy debt load, the healthy economic recovery, and the successful vaccine rollout, according to Lascelles. Biden recently announced the U.S. is “now on track to have enough vaccine supply for every adult in America by the end of May.”

Stimulus of this magnitude risks a spike in inflation in the short term. Inflation expectations have already risen on anticipation of the package, the reopening of the economy, and concerns over supply chain disruptions. Notably, the ISM’s Manufacturing Prices Paid Index increased to 86 in February, a level only surpassed in 2008, pointing to input inflation.

While it’s reasonable to expect inflation to pick up in the short term, Lascelles suggests deflationary forces should keep inflation in check in the medium term. With the current business cycle in a very early phase, economic slack is likely to linger for the next year or two. The aging of the population and the maturing of emerging market economies also suggest to us that inflation pressures will not spiral out of control.

RBC Capital Markets expects U.S. GDP growth at 6.5 percent and inflation of 2.7 percent for 2021, but it sees upside potential to this GDP forecast.

China’s economy was an outlier in 2020, growing as most others contracted. Consensus expectations call for another robust rebound this year, penciling in a GDP increase of over eight percent. However, the government set a surprisingly low growth target at “above six percent.” Such a low number suggests China aims to ensure quality and sustainable growth, as eight percent growth would be unlikely in 2022.

This target was announced at the recent annual “Two Sessions” confab, the country’s main political gathering. At these meetings China typically announces the concrete short-term steps needed to achieve the country’s long-term goals. Back in November 2020, China released its 14th Five-Year Plan. This laid out its goals of transforming into an advanced economy by 2035, which would require the economy to roughly double in size from 2020 levels, and achieving net-zero CO2 emissions by 2060.

We expect the People’s Bank of China will tighten monetary policy in a gradual and managed manner to ensure the economy does not overheat.

Europe’s vaccine rollout faces challenges. Moreover, its fiscal response has been comparatively more timid with national governments weary of yawning fiscal deficits. The €750 billion EU rescue package will help underpin growth, but the impact may be restrained given funds will be disbursed to national governments through to 2026.

Still, as lockdown measures are eventually lifted, and as the vaccine rollout gathers pace, we expect a quick rebound, helped by the release of household savings, much like we saw after the first lockdown. RBC Capital Markets expects euro area growth will reach 4.1 percent in 2021.

UK: The return of fiscal prudence

After a disastrous handling of the pandemic, the UK’s vaccine rollout has earned praise. The government plans to fully reopen the economy on June 21. Nevertheless, the economy is suffering and an additional support package worth more than 2.5 percent of GDP was recently announced.

Emboldened by reopening prospects, measures that aim to balance the books were also announced, making the UK the first country in the developed world to show such resolve. These include an increase in the corporate tax rate from 19 percent to 25 percent by 2023. For businesses, an additional tax burden is unwelcome, though a more lenient approach to regulation and competition could offset this somewhat. The government’s future attitude towards these issues in a post-Brexit world is a key factor to watch.

For now, the consensus expects the UK will see GDP growth of 4.5 percent in 2021.

Canada appears to have managed to avoid an economic contraction during the second wave. The economy eked out growth of 0.1 percent in December and initial readings for January suggest a further 0.5 percent gain. Lascelles also points out there seems to have been additional momentum in February. He thinks the Canadian economy may well perform ahead of the Bank of Canada’s estimate of four percent GDP growth for 2021.

Given this generally encouraging economic growth outlook, we reiterate our Overweight stance in global equities and expect them to generate modest returns on a 12-month horizon. We believe equities can withstand the current increase in bond yields, though volatility could spike and the recent rotation into reflation-driven and value stocks is likely to continue.

This article was originally published in the Global Insight Weekly with the title “Shapes of recovery: Regional growth snapshots”