The U.S. is on pace to breach the debt ceiling, a statutory limit on borrowed money, by summer. Absent congressional action, this would leave the Treasury unable to pay its bills, including salaries for government employees, Social Security for retirees, and, eventually, interest and principal repayment on U.S. government bonds. Prospects for smooth congressional action look dim, with Republicans in the House of Representatives committed to budget renegotiations as a prerequisite to raise the ceiling and the White House looking for a standalone bill.

While we see a debt-ceiling-induced U.S. default as exceedingly unlikely, we believe it would be a mistake for investors to conclude that the process is therefore costless. We anticipate political brinkmanship bringing higher volatility to both equity and fixed income markets. Longer term, we think that the closer the U.S. gets to the brink and the more frequently this issue arises, the more incentives for overseas investors to shift savings away from the dollar, potentially putting at risk its status as the world’s reserve currency.

The U.S. spends money based on congressional appropriation signed by the president. Funding for these legislative initiatives comes first from taxes and fees, and, if these are insufficient, the government sells debt to raise the balance.

Since 1939, the U.S. has had a limit on the total amount of borrowing legally permitted. Increasing the debt ceiling to match appropriated spending was routine for most of U.S. history; the process was even automatic for a period from the late 1970s to 1995. In recent years, however, passing the required legislation has been difficult when Congress and the White House are not controlled by a single party.

This year’s negotiations look particularly challenging, with the Democratic White House rejecting negotiations and the House Republican majority committed to spending cuts as a prerequisite to increase the debt ceiling.

Despite these public differences, we do not see the U.S. defaulting. The global economic implications are so negative that we believe political leaders will see no advantage to being associated with it. In addition, there are several default avoidance measures, ranging from the absurd—minting a trillion dollar platinum coin—to the merely odd—selling high coupon, low face value bonds—that can be used to keep the U.S. current on its obligations while maintaining technical compliance with debt limits.

In the end, though, we believe that the eventual resolution will be more prosaic: a negotiated solution that provides cover to congressional leaders committed to reducing spending over the medium term while leaving the U.S. budget essentially unchanged.

While the resolution is likely to be roughly neutral to government finances, the process matters. To maximize negotiating positioning, both political parties have to appear willing to accept some risk of default; and to placate political supporters, neither side will likely want to concede until the last minute. The net result could be a troubling prospect for markets.

In the short term, we believe that both global bonds and stocks are likely to see elevated volatility. The potential implications of a U.S. default for global finance are so negative that even a small change in probability has significant price impact. The concern for most institutional investors is not that the U.S. intentionally defaults, but that miscalculations and misunderstandings carry us over the edge; a risk that amplifies the closer we get to the hard ceiling. 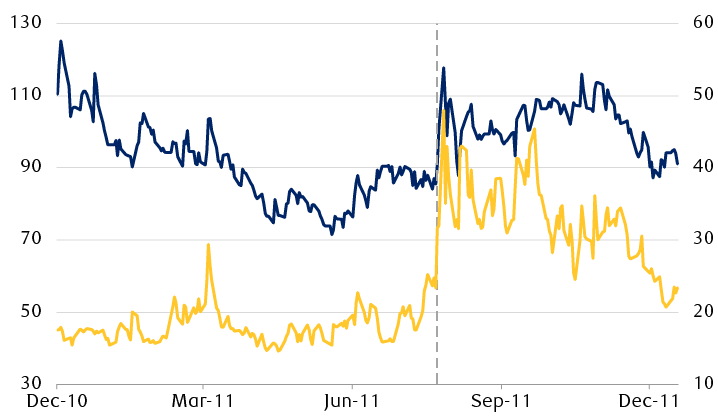 Line chart showing option implied volatility indices for the S&P 500 and the Treasury bond market in 2011. Each index saw large increases ahead of the debt ceiling deal being agreed in early August, with volatility persisting above pre-deal levels through year end.

Longer term, we believe that the U.S. increasingly risks pushing foreign investors into diversifying currency holdings away from the dollar, potentially eliminating the so-called “exorbitant privilege” the U.S. currently enjoys as the issuer of the world’s preferred currency. Critical to the greenback’s success as a global savings vehicle is the large amount of perceived low-risk government debt; emergency funds need to be held in assets that are believed to be “secure” in all political and economic circumstances.

Biting the hand that funds you

The problem with the debt ceiling negotiations, in our view, is that it requires the two parties to implicitly—and potentially explicitly—entertain the idea that there are domestic political goals worth defaulting on this debt. Even if no one truly believes that position, it cannot help but weaken the perceived dependability of the U.S. government, particularly if future willingness to repay could come down to a few House seats or electoral college votes.

This problem is not merely theoretical. The last significant standoff over the debt ceiling was in 2011, and the nonpartisan Government Accountability Office estimated that it led to at least $1.3 billion in additional interest costs for the federal government. The closer the U.S. gets to a default this time—or the more absurd the measures it uses to avoid one—the higher the likely costs.

The politics on the debt ceiling are complicated and even some senior House Republicans have come out with comments suggesting a quick ceiling raise is advantageous. A legislative victory could transform into a political albatross. Reducing spending—even when popular in theory—becomes less popular when taxes are raised or particular programs are cut.

The timing of spending cuts could also prove problematic, with a near-term federal government pullback potentially deepening an economic slowdown. With so many moving parts, we could see politicians of both parties deciding that a quick and clean increase of the ceiling is preferable to being potentially tagged with the blame for a deep recession, higher taxes, or some combination thereof. 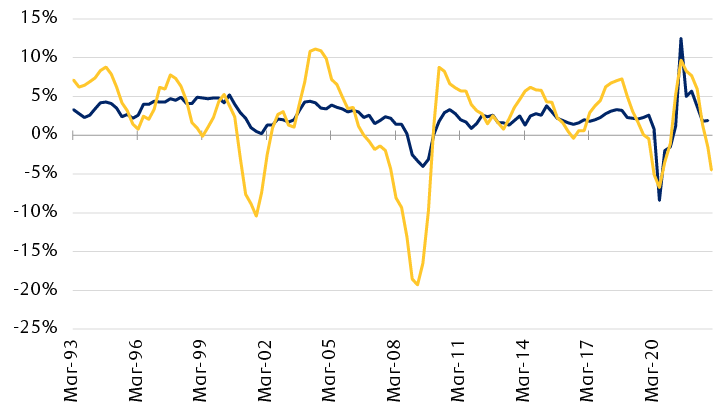 Line chart showing the Conference Board’s Index of Leading Economic Indicators (LEI) and the year-over-year change in GDP. Both measures have been declining since late 2020 with the LEI in negative territory, indicating contractionary conditions.

For fixed income investors, we see the debt ceiling noise as an unfortunate cost of being invested in the U.S. We believe that the potential upward pressure on interest rates is likely to be more than offset by the strong fundamental backdrop for Treasuries, including signs of a broadly slowing economy and a likely shift by the Fed to less restrictive monetary policy.

The potential for a U.S. default makes for good television and impressive headlines. But we believe that the bottom line this year—as it has been for over 230 years—is that the U.S. will make timely repayment of all its debt.