Will the UK trip over itself on the way out the door? What does this baffling Brexit mean for the economy and markets?

Prime Minister Theresa May’s Withdrawal Agreement, the culmination of more than two years of negotiations, was rejected on March 12 by the House of Commons for the second time, and by a significant 149 votes. Eurosceptics felt the last-minute enhancements May secured from the EU fell short of their demands for a fixed term to the “Irish backstop,” which would avoid a hard border in Ireland, or a unilateral mechanism to exit it. Many also seem to prefer a “no-deal” Brexit to May’s deal. Pro-EU Members of Parliament (MPs), in turn, felt less pressure to vote for the prime minister’s plan, as the possibility of an extension to Article 50, the process by which the UK will leave the EU, had opened up.

While MPs disagreed on what kind of Brexit they want, they did agree on what kind they do not want. The House of Commons also voted the following day to instruct the government to avoid pursuing a no-deal policy, though no deal remains the legal default if no consensus forms around an alternative plan. Moreover, the House of Commons carried a motion requesting an extension to Article 50.

Such an extension would require unanimity of the 27 EU countries, and while one is likely to be granted, it is by no means a certainty. May seems to favour a one-off, short extension, but it is not her decision. Some EU leaders have suggested a longer period might be more conducive to forging a consensus from the warring political factions.

Closer to the Brexit denouement?

Uncertainty remains very elevated given the low visibility on forthcoming events. Far from narrowing the potential outcomes, the recent developments raise the possibility of new scenarios and shift the probability of others. 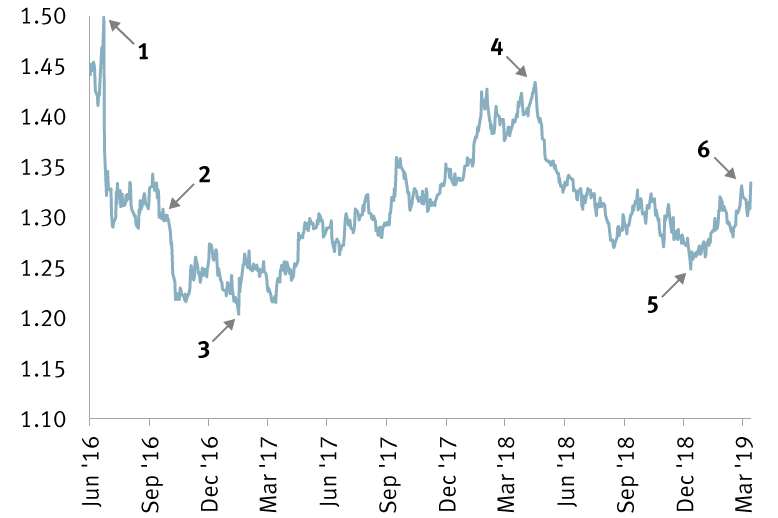 The prime minister intends to submit her Withdrawal Agreement for a third vote, hoping the prospects of a long extension and a “softer” Brexit may entice ardent Brexiteers to support it. Alternatively, a cross-party majority could eventually emerge for a softer deal, such as a customs union or the “Norway-plus” model (likely mildly positive for the pound). If the deadlock continues, the probability of it being broken by either a general election (probably a negative for the pound given the uncertainty) or a second referendum (likely positive for the pound) could also increase, raising the possibility of no Brexit at all—the most positive scenario for the pound.

For now, the reduction of the cliff-edge Brexit risk on March 29, the potential extension to Article 50, and the possibility of a softer Brexit if May’s deal is rejected for a third time all seem largely priced into the pound.

As for the economy, avoiding a chaotic cliff-edge Brexit is undoubtedly good news, but any rebound in economic activity from a Brexit resolution will likely be postponed. The economy is starting to feel the pinch of the sustained uncertainty. Business investment is plummeting and employers’ hiring intention is declining as businesses postpone spending decisions until clarity on Brexit emerges. 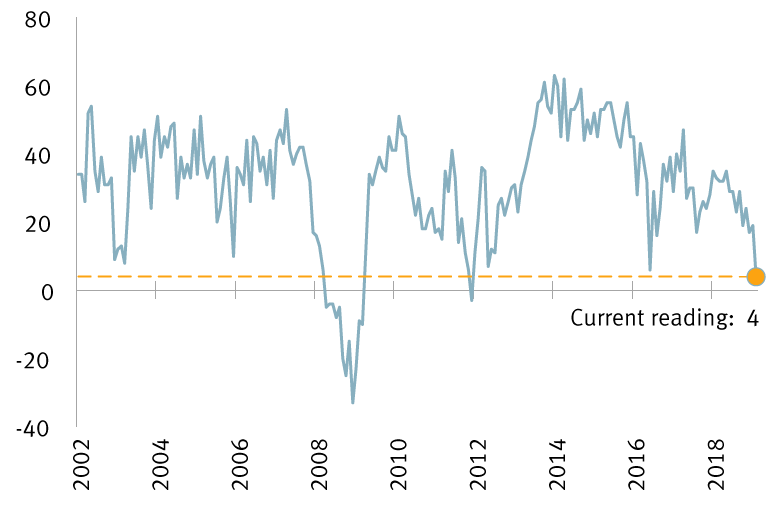 The Bank of England (BoE) recently lowered its growth estimates for 2019 from 1.7 percent late last year to a more modest 1.2 percent.

The market is currently pricing the BoE’s next 25 basis point interest rate increase for the second half of 2020. BoE Governor Mark Carney recently addressed Parliament and stated that the market was severely underpricing the possibility of a hike should a soft Brexit emerge. We would expect the BoE to stick to one interest rate increase per year under a soft Brexit scenario, if the economic data does not deteriorate further to the downside.

Given the uncertainty, we maintain our Market Weight stance on UK fixed income (for both government bonds and corporate credit) and equities.

We see Gilt yields remaining low over the near term given the political and economic risks. For corporates, we are increasingly selective as we do not expect material spread tightening. We continue to prefer bonds from non-UK-centric issuers, where we expect more robust fundamentals.

As for UK equities, low valuations suggest a slowdown, if not a no-deal Brexit, is largely discounted. UK equities are trading at a steep discount to their long-term price-to-earnings and price-to-book value medians. The FTSE All-Share Index’s dividend yield is a generous 4.5 percent, a level unseen since the Lehman crisis. We maintain our long-term bias towards globally diversified companies and see opportunities in the Energy sector and Financials in particular.

The emergence of a consensus around a softer Brexit would lead us to be more positive on risk assets.

Find peace of mind knowing your loved one with a disability or medical condition will have access to care over the long term, or if something unexpected happens.