Two steps forward, one step back and get used to some additional volatility. These are the messages we think the U.S. equity market is sending.

Even though the major indexes are only slightly below their all-time highs reached on July 12, the market was jolted recently. The Dow Jones Industrial Average dropped 2.1 percent on Monday and registered a cumulative decline of 3.0 percent over five sessions, before bouncing back in subsequent days when dip-buyers emerged.

This back-and-forth action raises questions about why the market is on edge, and has prompted some unease about this phase of the bull market and economic cycle.

We think a mix of interrelated issues jostled the market: the increase in COVID-19 infections, particularly the delta variant; concerns about the degree to which virus-related restrictions would be resumed and their potential economic impact; and the swift decline in the 10-year Treasury yield, which raised uncertainty worldwide about what—if anything—the bond market may be signaling about future economic growth.

At the very least, this is a reminder that volatility and equity investing go hand-in-hand. There is often a “wall of worry,” and news about outside forces or concerns about stock fundamentals and/or monetary and fiscal policies can knock down the market from time to time.

We remain moderately Overweight equities in global portfolios as we don’t think these recent developments put the bull market and economic cycle at risk. Here’s why …

Delta is difficult but there is less tolerance for shutdowns. Even though some U.S. states and many countries are now struggling with delta and other variants are surfacing more frequently, overall hospitalizations and deaths are below prior waves likely due to the uptake in vaccinations. Importantly, authorities in most countries seem reluctant to resume strict lockdowns as they are well aware of the severe employment, household income, and broader economic and social consequences—not to mention the previous shutdowns took a chunk out of government budgets and exacerbated deficit spending.

As long as hospitalization rates don’t risk crippling health care systems and vaccines prove to protect people from severe consequences of infections, we think any related economic softness can be absorbed without serious repercussions. It seems investors embraced this thinking as the market rebounded.

The economic cycle has longevity. U.S. GDP growth forecasts have shifted a lot in recent months, pushing the bar higher. Whereas the consensus forecast of economists previously expected GDP to reach its pre-pandemic level in 2022, it now anticipates it will get there in Q3 of this year and then extend further thereafter, as the top chart shows. These more optimistic forecasts are now baked into financial markets. The uptick in COVID-19 infections and plunge in the 10-year yield caused some to question whether such a trajectory can be achieved. 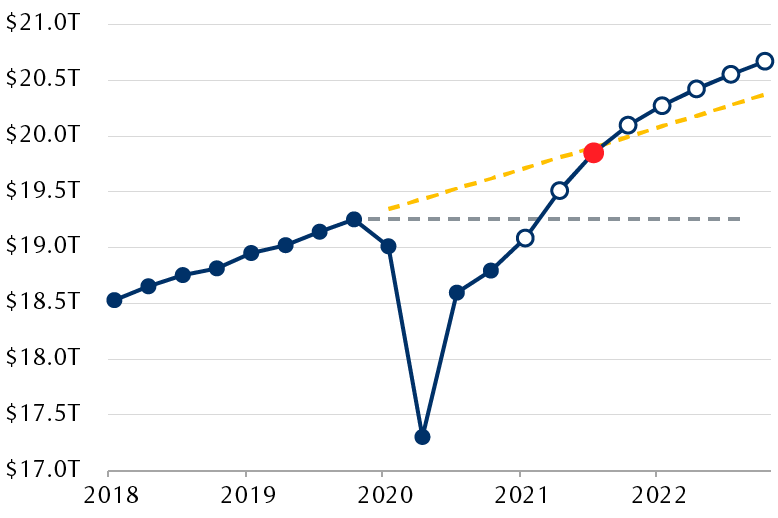 We think the recovery is durable—and this is what long-term investors should focus on, rather than any quarter-by-quarter variations versus economists’ projections. RBC Global Asset Management Inc. Chief Economist Eric Lascelles wrote, “… our own business cycle work argues that there can probably be several additional years of economic expansion before this particular cycle comes to an end.” Nevertheless, he believes it’s reasonable to expect some growth headwinds in 2022 due to the strong buildup in inventories that has occurred lately as businesses have been concerned about COVID-19-related supply shortages and inflation. This may be pulling forward some economic activity into this year that would have occurred next year. Even so, he doesn’t think this would be game-changing for the economy.

Treasury yields have more influence on sector positioning than the level of equity indexes. Equity markets have lived with ultralow government bond yields for many years, and this has not impeded overall growth in corporate earnings or the ability for major equity indexes to move higher so long as recession risks remained low.

But whether the 10-year Treasury yield is on a downward trajectory, like when it briefly dipped to 1.19 percent recently, or a modestly upward trajectory can impact the performance of various equity market segments and sectors. The same goes for the shape of the Treasury yield curve. When the curve flattens (when the difference in short-term rates versus long-term rates narrows), the growth segment of the equity market has a tendency to outperform. Conversely, when the curve steepens, value stocks have a tendency to lead.

For equities, we maintain a modest bias toward value sectors as our Fixed Income Strategies team anticipates the 10-year yield will gradually move up toward 1.75 percent by year-end while short-term rates will likely climb more slowly, resulting in a slightly steeper yield curve.

Par for the course

As the chart below shows, meaningful pullbacks often occur. Since 2000, in more than half of the years the S&P 500 pulled back 10 percent or more at some point during the year. Importantly, pullbacks and corrections are not uncommon even in good years. Among the 12 years with above-average annual returns, 10 of them included periods where the market pulled back seven percent or more.

Bottom line, volatility—an old familiar friend—is back, and its presence is normal.

Reality check: Pullbacks happen even in good years. Since 2000, more than half of the years have included pullbacks of 10% or more for the S&P 500. 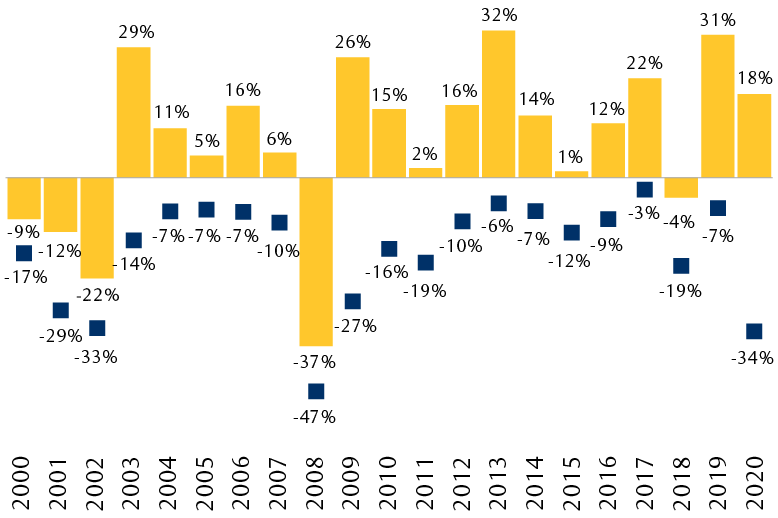