While we don’t dispute that monetary policy is critical to the overall economy and market pricing, we think speeches such as Powell’s likely offer less insight into future Fed actions than may first appear, and that the split in market reaction—where equity prices have declined more significantly than bonds—reflects that underlying reality. 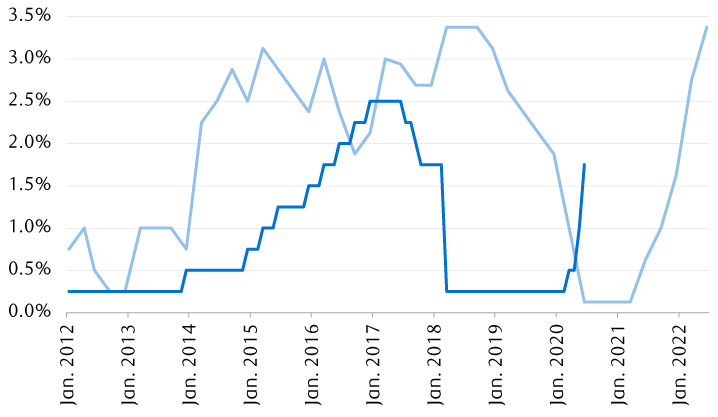 Line chart comparing the Federal Reserve’s median projection for interest rates at a date 2 years in the future with the actual level of interest rates in 2 years. The chart shows consistent differences between the Fed’s estimates and actual values, with differences of at least 2% for nearly four of the eight years for which we have data for the period of January 2012 through June 2022.

The Fed is a remarkably poor predictor of its own behavior. Even the members who vote on policy have been unable to forecast their own future votes with any degree of accuracy. As the chart shows, the Fed’s “dot plot,” or the quarterly projections from Fed policymakers, have been remarkably inaccurate in projecting future interest rates.

The key failing of long-term Fed projections—in speeches and the dot plots—is that they tell us what Fed members are likely to do if the economy unfurls exactly as expected. But the economy rarely cooperates, and the results are evident in the large forecast errors. Longer-term Fed projections are analogous to a household budget based around winning the lottery; they may tell us something about the individuals involved, but not much will be directly useful in the future.

The Fed is aware of the problem and has added additional context and commentary to its formal projections, and we believe the same qualified approach should be taken to Powell’s comments.

Central bank speakers are also constrained in what views they can express.

Fed policymakers and researchers have advanced cogent arguments against increasing rates much beyond their current level in the near term: policy acts with a lag, so the full impact of recent hikes has yet to be felt; the majority of current inflation is coming from supply chain disruptions that are unlikely to be resolved by tighter policy; and there are signs core inflation has already peaked.

But even if this reasonable, well-supported position reflected Powell’s actual view, we think he was effectively precluded from saying so at Jackson Hole because it would risk entrenching inflation expectations, possibly pushing wages—and future inflation—higher. As importantly, after the failure of the “transitory” inflation label, the central bank risks its institutional credibility if it gets ahead of market sentiment on proclaiming victory on prices.

The result is a kabuki theater element to Fed speechmaking, as policymakers tell markets and consumers what they need to hear instead of offering a balanced assessment of current conditions.

Could markets handle a non-hawkish view? 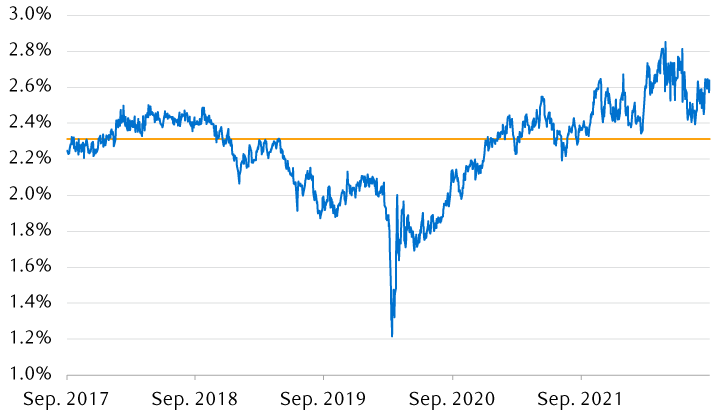 Line chart showing the 5y5y inflation swap—a market derived measure of expected annual inflation over a 5-year period five years in the future—and its median level (2.31%) since September 2017. The current level of 2.66% is more than 0.3% higher than the median level and is 0.03% higher than before Fed Chair Powell’s speech.

Powell’s speech offered helpful clarity on near-term policy moves, as we believe he largely solidified the idea that this month’s policy choice is between an increase of 50 and 75 basis points (bps). Interest rate futures and 2-year Treasury yields now reflect this position, with the latter hitting the highest levels in nearly 15 years.

Beyond those short-term interest rate moves, however, Treasury markets largely shrugged off the speech, with longer-term bond yields quickly returning to last week’s levels. In the three days following the speech, 5-year bond yields consistently closed below 3.27%, hardly consistent with the idea of the Fed aggressively hiking and maintaining rates well beyond its current target.

Bond investors seem unwilling to give Powell the benefit of the doubt on anything beyond the immediate policy moves, apparently preferring to wait and see how economic data and the Fed’s resolve shape up.

Despite the bond market’s relative stability, equity markets have moved notably lower since the speech.

In part, this is because equities—particularly growth equities—are very sensitive to higher yields. If rates were to rise 1% more than markets expect, the loss on a 5-year Treasury would likely be less than 5%, as the impact of the higher rate environment disappears at maturity. It’s not great performance, but manageable for most investors, in our opinion. For equities, the likely loss could be greater, as the impact of higher rates persists until they come down. So even if there is only a 10% chance the Fed follows through, equity markets have to take greater notice than most bond investors.

In addition to the ongoing challenges with inflation and the potential policy response, equities face other potential headwinds: the elevated risk of a full-blown domestic recession, the likelihood 2023 consensus earnings estimates are too high, and the energy crisis in Europe. We believe these factors help explain why we have seen stocks and corporate bond prices—which tend to be growth sensitive—decline since the symposium.

For these reasons—among others—we continue to recommend Market Weight exposure to U.S. and global equities.

We know a little—but not much—more as a result of Powell’s speech. Policy will ultimately depend on the broader economic backdrop, even if we now have more reason to believe that a 75 bps hike is on the table this month.

For the individual investor with a long-term view, we would argue that the hype around the speech emphasizes the importance of looking first and foremost at asset allocation and long-term planning. No one has a crystal ball, and attempting to time the market—even in the guise of predicting monetary policy moves—is unlikely to be beneficial to investment returns.