Supply chain problems are a source of concern and underpin inflation pressures. We examine root causes, and discuss the impact on the equity market.

As major equity indexes came off the boil in September, key reasons for the market’s retreat were supply chain constraints and their knock-on effect on inflation. The problems have been present and well known for many months, but they have become exacerbated recently. We think they are unlikely to abate anytime soon.

COVID-19 prompted much of the supply chain bottlenecks, and there are other factors:

The global versus equity market impact

The bottlenecks are unlikely to disappear overnight. A month ago, RBC Elements conducted a digital intelligence study that indicated 77 percent of the major ports it monitors were experiencing abnormally long turnaround times, and that the overall global problem was trending “unequivocally worse.”

But there is an important distinction to be made between the impact on the global shipping industry and the impact on U.S. stock market sectors. Some sectors are experiencing major-to-moderate supply chain problems (Consumer Discretionary, Materials, and Industrials), while other sectors are not experiencing problems (Health Care and Information Technology), according to a survey of RBC Capital Markets equity analysts. The remaining six sectors seem to be coping, and fall somewhere in between, as the chart illustrates.

Survey of RBC Capital Markets equity analysts: How would you characterize supply chains for your industry? 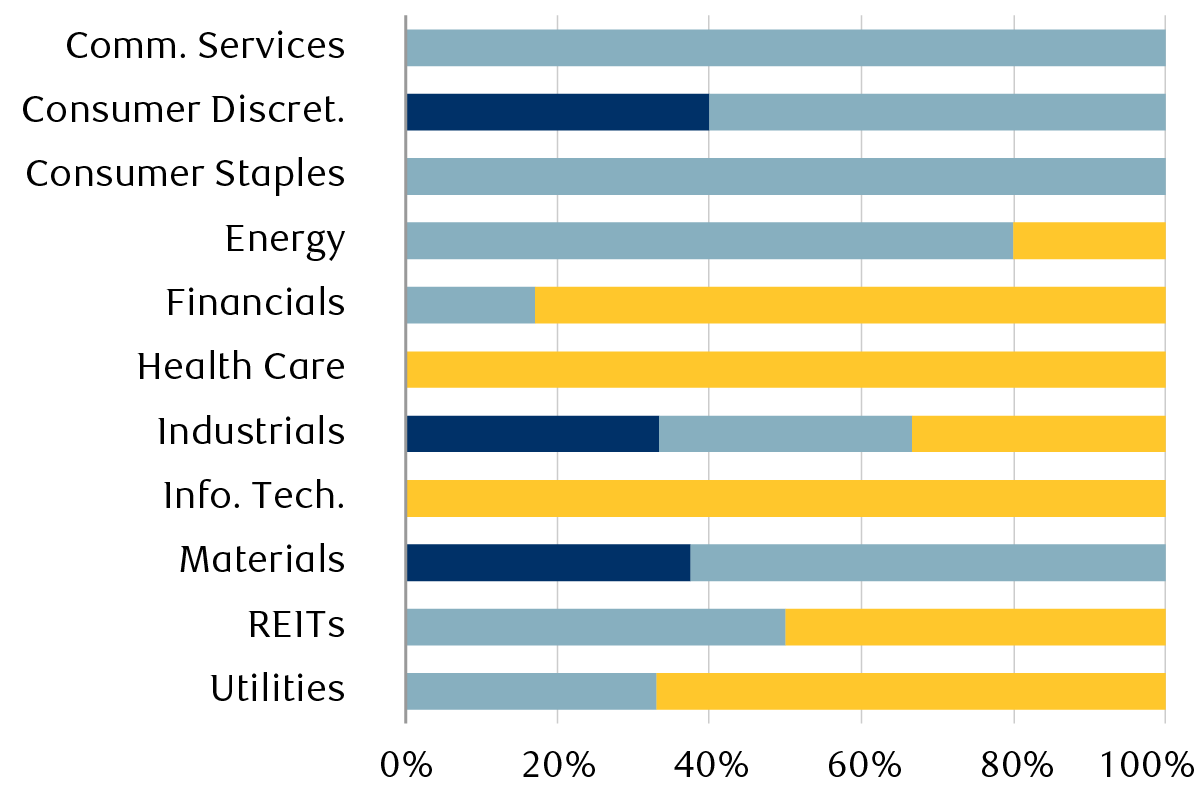 Major problem
Moderate problem
Not a problem or not relevant

Lori Calvasina, RBC Capital Markets, LLC’s head of U.S. equity strategy, believes the survey results indicate that supply chain problems facing the broader domestic equity market “may not be as dire as September headlines suggested.” Management teams’ comments during the Q3 earnings reporting season should provide further insights on implications for profit margins, and on the magnitude and potential duration of the problem.

RBC GAM’s Chief Economist Eric Lascelles anticipates that the holiday shopping season will keep shipping costs “extremely high” over the next couple months, and thinks supply chain problems could persist another six months to a year. It will take time to resolve the labor supply-demand mismatch. Some firms have already warned that bottlenecks could last into 2023.

The path of the pandemic could play an important role, after all, it is the source of much of the stress. Calvasina notes that the trend in global COVID-19 infection rates has been a loose leading indicator for freight costs. So if infections peaked in September 2021, there could be relief over time.

Ongoing supply chain pressures will likely be a headwind for economic growth and have knock-on effects on inflation over the near term and possibly midterm. However, Lascelles anticipates that once supply chain pressures ease—with the increase in shipping costs and product input shortages eventually abating—this should end up being a deflationary and pro-growth force for the U.S. and global economies.

As long as supply chain problems don’t worsen meaningfully or drag on for an extended period, we think the overall impact on corporate profits and the equity market will be contained. But this issue is one of the reasons we believe inflation will remain elevated in North America and will rise in Europe and Asia, and that equity market volatility could persist and returns could be more muted in the next 12 months.

How will the end of unemployment benefits ripple through the U.S. economy?

The expiration of federal benefits is likely to kick start millions of job seekers, and we see positive and negative implications for the economy.