Though U.S. interest rates are at zero percent, and Treasury yields are near record lows, the Fed is apparently looking for more ways to ensure that remains the case, and for longer. This week, New York Fed President John Williams grabbed headlines by confirming that the next policy tool under consideration may be yield curve control. Speaking with Bloomberg, Williams said, “Yield curve control, which has now been used in a few other countries, is I think a tool that can complement—potentially complement—forward guidance and our other policy actions. So this is something that obviously we’re thinking very hard about.”

The basic structure of a yield curve control program is that the Fed would target a specified yield target at certain points on the Treasury yield curve—pledging to buy, or sell, as many Treasuries as necessary—to peg yields to a certain level. The other countries he is referencing are Japan, which is targeting a 10-year yield of zero percent, and more recently Australia, which as of March is targeting a 3-year government bond yield of around 0.25 percent.

The Fed has actually used yield curve control in the past, specifically during World War II, in an effort to keep government financing costs for the war effort low, as the Fed capped long-term Treasury yields around 2.5 percent. But looking to where the Fed finds itself today, in some ways the strategy might actually be preferable to the Fed’s currently unlimited quantitative easing program.

The price of success

Under quantitative easing, central banks simply buy securities in bulk, hoping to push around markets—and yields—to achieve a largely undefined goal. Under yield curve control, central banks only need to buy as needed to achieve the stated objectives—when the yield curve targets were announced in 1942, the Fed did not actually buy in large quantities in the years that followed, but was still able to keep yields in check. And with the Fed’s balance sheet now beyond $7 trillion, the Fed may be looking for a more cost-effective approach to stimulating the economy via low borrowing rates.

To be sure, Williams went on to say that the tool may have little impact at the moment given the low state of yields. The yield curve is already essentially flat through 2-year maturities as the market expects an extended period of zero percent Fed policy. For now, forward guidance will likely remain the Fed’s primary tool, but a yield curve control program could be used to reduce yields, likely around the 5-year maturity to start, in our view, should the Fed go down that path.

How might the Fed want to remake the yield curve? 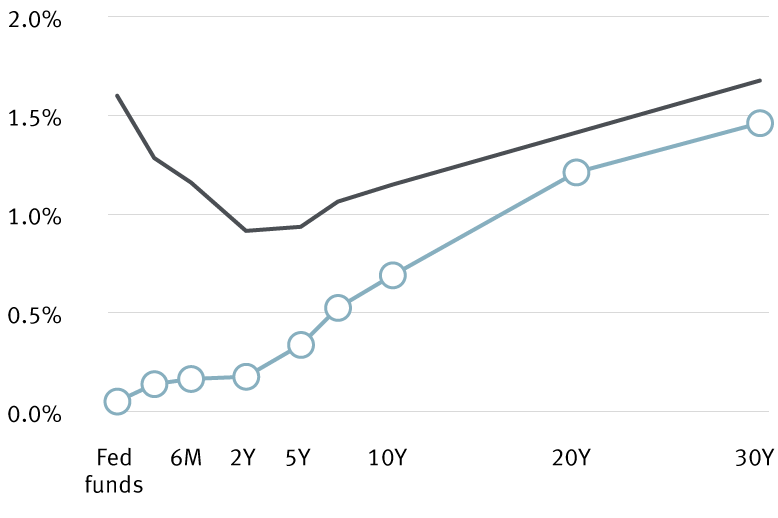 So with the Fed ramping up efforts to keep yields low, we look to go where yields remain high. For credit investors, the key metric to assess valuations is the yield compensation over risk-free Treasuries. On that basis we continue to see historically attractive levels in U.S. high-yield corporates, and now shift to a positive outlook on the sector, having turned Neutral in mid-March at the peak of the market selloff.

The average yield on an index of Treasury securities is at a record-low yield of just 0.50 percent. Investors can move to U.S. investment-grade corporates for an additional two percent yield over Treasuries, and though this yield advantage is about equal to the 10-year average, the 2.5 percent all-in yield at this stage isn’t far-removed from the record low of just 2.2 percent. High-yield corporates, on the other hand, now yield 6.5 percent over Treasuries, well above the 10-year average of about five percent, for an all-in index yield of nearly seven percent, which is also above-average for the past decade. 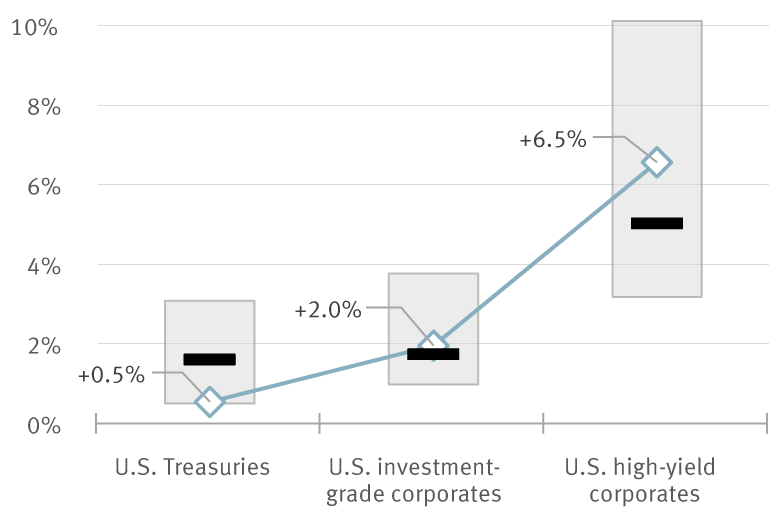 Of course, risks remain on the horizon, particularly as year-to-date U.S. corporate bankruptcies have swelled to nearly 100 based on Bloomberg data, the fastest pace since the height of the global financial crisis. However, we still see an attractive risk-reward profile based partly on the back of ongoing monetary and fiscal stimulus support, and with companies able to shore up liquidity profiles by raising debt in capital markets that remain open for business. The number of companies with bonds trading at distressed levels—10 percent over Treasuries—has declined by nearly half since March, with 463 now trading at heightened risk levels.

From a portfolio perspective, RBC Wealth Management’s asset allocation guidelines would suggest that a classic 60 percent equity and 40 percent fixed income portfolio would contain a three percent Neutral allocation to high-yield corporates; our new Overweight recommendation would suggest a five percent allocation. But as is the case with any risk-oriented investments, diversification remains key, in our view, particularly with the depth and duration of the pandemic still highly uncertain.

In some way, this may be exactly what the Fed wants investors to do, and clearly echoes the “reach for yield” environment that swept markets during the zero interest rate policy regime in the aftermath of the 2008 global financial crisis. But in December 2009, when high-yield corporate bond valuations were similar to today’s environment, the sector went on to deliver a total return of more than 15 percent over the next year, outpacing even stocks, which were up just over 11 percent, as the economic recovery took hold—a scenario we continue to expect in the back half of 2020. And so with the Fed dusting off the playbook of old, perhaps the old mantra of “don’t fight the Fed” once again applies as well.