RBC Global Asset Management’s chief economist shares his views on the cycle positioning of the U.S. economy and recession probabilities.

Given the august age of the U.S. expansion, it’s fair to think about the expansion’s life expectancy and the appropriate investment strategy. Recently we checked in with Eric Lascelles, chief economist at RBC Global Asset Management, about the economic growth outlook, the cycle positioning of the U.S. economy, and recession probabilities.

U.S. economic growth has exceeded that of other developed countries. Will that persist?

U.S. fiscal stimulus is fading, ceasing to provide a material boost to economic growth in 2019, and eventually translating into an outright drag in 2020. This marks quite a contrast to last year, when stimulus provided a heroic boost to U.S. growth.

Global economic headwinds include protectionism, fading fiscal stimulus, and somewhat less favourable financial conditions (recent inversion of yield curves). These headwinds blow more strongly in the U.S., suggesting that the country’s growth advantage could begin to shrink relative to the rest of the developed world. The economy of the other global behemoth—China—also continues to slow, though stimulus programs may start to gain traction by the second half of the year.

Given the time of year, it is perhaps also worth mentioning that U.S. growth often suffers from a curious seasonal distortion that makes the first quarter of each year appear unnaturally weak. Any U.S. softness in the near term needs to be filtered through this lens. 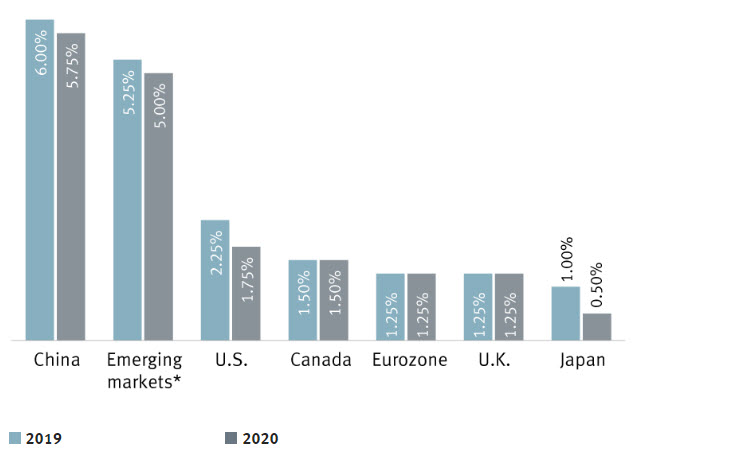 What factors are signaling the economy is “late” in the cycle?

As usual, many of the 17 inputs that go into our scorecard of the U.S. cycle disagree with one another. Counterintuitively, this is the strength of the approach. Whereas nearly any assertion can be supported by a rogue data series somewhere, it is much harder to be misled (or mislead) when considering many angles at once.

Second, although this has been the conclusion for many quarters running, there is considerable forward motion beneath the surface. Whereas a year ago “mid cycle” was giving “late cycle” an honest run for its money, the “mid cycle” argument has withered markedly over the past year. Simultaneously, the “end of cycle” argument has strengthened substantially, now representing the second-most plausible conclusion.

One of the more compelling endorsements of a late-cycle view is that the U.S. economy is now extremely tight. When asked to list their main problems, businesses rarely mention poor sales, and regularly complain about the quality of workers they are able to attract. This is relevant to the cycle in part because it is hard to continue growing once economies start to bump up against their natural constraints, and in part because tight economies are prone to boiling over, triggering the end of the cycle. 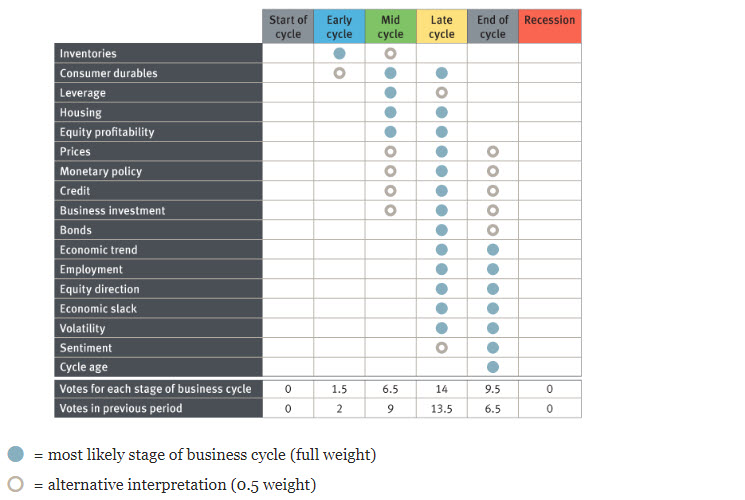 In the credit space, auto-loan delinquencies have been rising for some time and are now fairly high, especially in subprime lending. Meanwhile, credit-card delinquencies are also rising—albeit gradually and from historically very low levels. In fairness, mortgage delinquencies are still low and the broader household-debt environment is not overly worrisome, but little dents in the armour are forming—a classic signal of an aging business cycle.

What are the odds the U.S. could slip into recession this year or next?

The business cycle and the risk of a recession are intertwined concepts, with recessions representing the natural conclusion of the business cycle. Of the recession models we monitor, most acknowledge a rising recession risk, though with substantially different assessments of the precise likelihood. We assign a 35 percent chance of a 2019 recession, and slightly higher odds for 2020.

What does a “late-cycle” economy mean for investment strategy?

The world remains awash in uncertainty. Some of this could manifest in the form of better-than-expected outcomes—the possibility, for example, that secular stagnation might ebb more quickly than presently assumed. However, much of the uncertainty tilts toward downside risks. Among a fairly long list of these risks, the three primary items are protectionism, Chinese growth, and the U.S. business cycle.

The fact that we may be late in the cycle doesn’t make the case that investment risk-taking should be abandoned altogether, but rather that it must be undertaken cautiously, as the risk-reward equation isn’t as favourable as it was earlier in the cycle.

We anticipate continued financial-market volatility in 2019, due to the lateness of the cycle, the flatness of the yield curve, and the degree to which the big macro questions of the day such as Brexit and tariffs will be resolved by mercurial politicians.