Investors around the world are increasingly thinking of the U.S. as a “safe haven,” and not just the Treasury market, which has long been referred to this way. According to RBC Capital Markets, the U.S. economy as a whole is now perceived as having “safe-haven” characteristics—and, importantly, this positive sentiment is spilling into the stock market as well.

While easing concerns about the spread of the coronavirus (COVID-19) outside of China have helped lift the S&P 500 to new all-time highs lately, we think this notion of domestic economic resilience has played an even greater role in boosting the market. The S&P 500 has rallied 4.4 percent so far this year, while other markets have collectively slipped 0.3 percent, as measured by the FTSE All-World ex-U.S. Index.

This sentiment—whether fully warranted or not—is unlikely to dissipate anytime soon considering the domestic expansion is poised to persist and other major economies are facing headwinds.

We believe this should help the U.S. equity market deliver at least moderate returns this year—albeit amid any volatility that could arise due to global economic forces or transitory factors such as the coronavirus.

The positive attitude about the U.S. comes despite expectations that domestic economic activity could trail last year’s pace.

RBC Capital Markets forecasts 2020 GDP growth of 2.0 percent, down from 2.3 percent in 2019 and below the 2.5 percent long-term average since 1990. The consensus estimate of economists and the projection by the World Bank are more subdued, both calling for only 1.8 percent GDP growth this year. 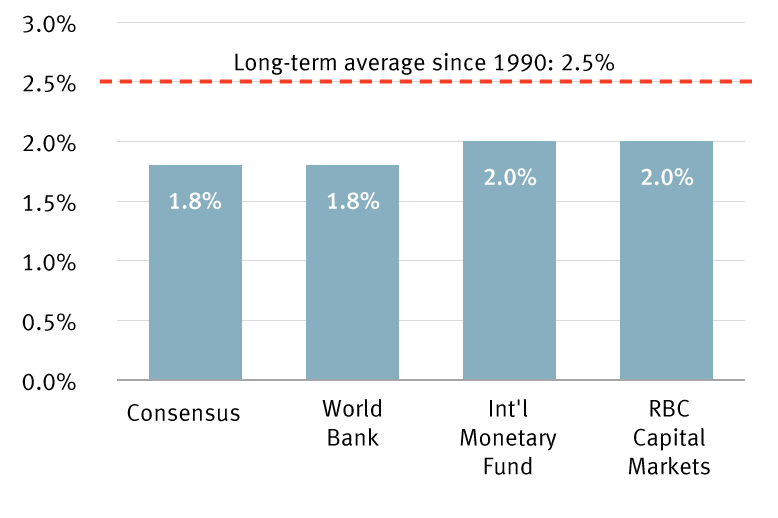 Nevertheless, since the Phase 1 trade deal with China, CEO confidence in the economy, expectations for capital spending, and hiring intentions have crept up. Also, pockets of weakness that surfaced last year, particularly in the manufacturing sector, have improved.

U.S. consumers have carried a disproportionate load this expansion cycle, as the chart illustrates, and we think this will persist in 2020. Employment and wage growth trends remain healthy.

Consumers have carried the biggest load

Contribution to U.S. real GDP growth during this expansion cycle (in percentage points) 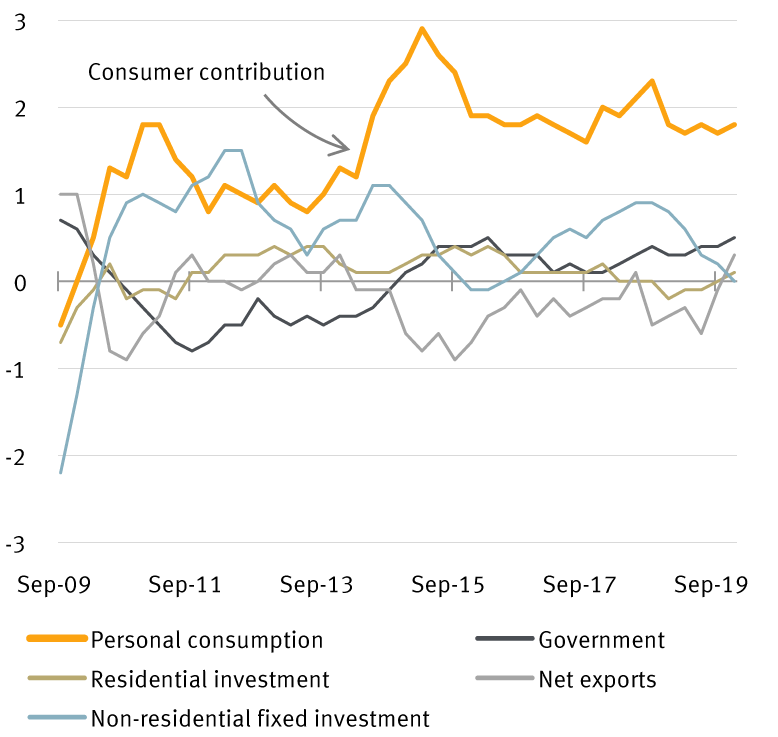 We think the “safe-haven” perceptions about the U.S. are partly the result of a “best house in a so-so neighborhood” phenomenon because other key economies face headwinds.

China is expected to slow materially due to the coronavirus outbreak and lingering structural challenges. Given the information that’s been released about the virus thus far, RBC Global Asset Management forecasts China GDP growth of 3.0 percent in Q1 instead of the usual 6.0 percent level. It anticipates full-year 2020 growth will slow to 5.6 percent from its prior 5.9 percent estimate and 6.1 percent last year. The Chinese government seems committed to stimulating the economy, and has the capacity to do so, in our view.

Europe’s economy has stabilized and some green shoots have even sprouted lately. But it is still likely to only muddle along this year. RBC Capital Markets forecasts a paltry 1.0 percent growth rate for the euro area in 2020, down from 1.2 percent last year.

India’s economy—more important than is often given credit—is also in retreat. RBC Global Asset Management estimates GDP growth will drift down to 5.5 percent in 2020 from 6.1 percent in 2019 and a 7.2 percent average rate since 2009.

Too many good vibrations?

There is a downside to the so-called “safe-haven” sentiment.

While we think it has resulted in money flowing into the U.S. market that may have otherwise found different destinations, it has also brought about highly euphoric positioning among institutional investors in U.S. equities.

According to RBC Capital Markets, an important proxy for attitudes and positioning of institutional investors is at the highest level since at least 2006. Specifically, this is indicated by asset managers’ net long position in S&P futures. This measure became elevated in late 2019, and in January it surged well beyond the peaks in previous years.

Effectively, this means institutional investors have much more bullish positioning in U.S. equities than normal. Euphoric sentiment can be a contrary indicator for market performance. In such circumstances, at the very least, the market is more vulnerable to a pullback if bad news hits.

Even if a pullback materializes in the coming months, the good news is the U.S. equity market is more correlated to GDP trends over time than many other major markets.

Since 1990, there has been a nearly 60 percent correlation between S&P 500 performance and GDP growth, whereas the correlation is under 40 percent for markets in Europe, a study by RBC Capital Markets found.

While continued economic growth is no guarantee the U.S. equity market will follow along in lockstep, we think it does provide a foundation for at least moderate or average returns in 2020—albeit with some volatility along the way.