The global economic outlook amid crosscurrents and conflicting signals

It’s worth looking at what’s on the radar for the global economy to gauge whether a growth storm will be averted.

Fears of a global growth slowdown and ongoing uncertainty around the U.S.-China trade spat sent shivers through equity markets in late 2018. A thaw came earlier than spring with financial markets rallying strongly so far in 2019. Optimism around trade developments supported the upswing while the Fed’s abrupt dovish U-turn has pared back investors’ U.S. recessionary angst.

Growth has cooled in the U.S., yet it is the darker economic clouds beyond its borders that appear to be keeping investors nervous about a brewing global growth storm. Rising geopolitical tensions, soft economic data in Europe and China, and trade uncertainty are underpinning the anxiety, but we see silver linings that should provide some calm before investors need to batten down the hatches.

The fading of U.S. recessionary fears on the back of the Fed’s pivot has injected life into equity markets, while an easing away from the earlier tightening of financial conditions is leaving investors to bask in the Fed’s embrace of patience. Comments from the central bank continue to point to a rate hike pause prevailing, and Fed Chair Jerome Powell alluded that the U.S. economy could be finding itself in a sweet spot.

In his semiannual testimony to Congress, Powell conceded that U.S. economic data has softened; however, excess slack in a still strong labor market should keep inflationary pressures “muted.” These conditions have created an environment that is ripe, in his view, for patience towards policy decisions, notably as the U.S. economy has faced “crosscurrents and conflicting signals” over the past few months. 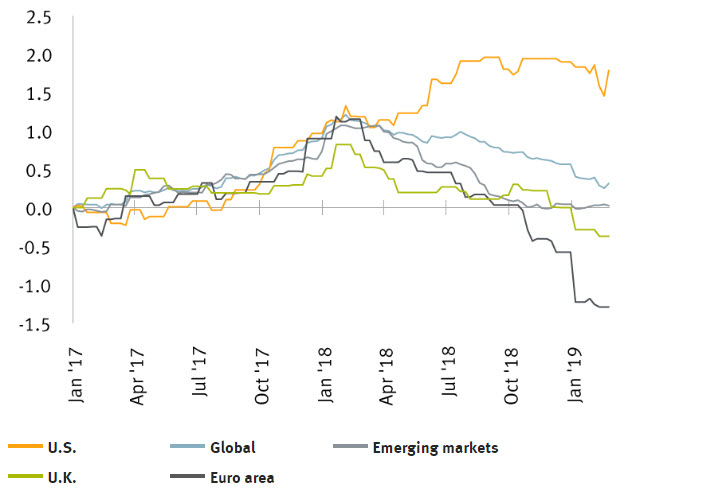 A favorable U.S. economic outlook appears at odds with a confluence of factors and is underpinning the tug of war described by the Fed. Greater financial market volatility towards the latter part of 2018 alongside elevated political uncertainty is feeding into the Fed’s caution. But Powell further flagged concerns about slowing growth across major foreign economies, advocating that it is a “good time” to watch and wait to gauge how the global outlook evolves.

Deteriorating growth prospects have dotted the global economy in recent months, led by slowdowns in Europe and China. Gauges of European economic activity sank to start 2019, signaling that the weakness seen in the latter half of 2018 was persisting. Germany’s export exposure to a weaker external backdrop underpinned its growth slowdown, while Italy slumped into recession to end 2018 and French activity was weighed down by the “Yellow Vest” protests.

But bright spots are emerging. A sizeable improvement and stabilization in German and French services activity in February point to domestic demand recovering. This in turn should be sufficient to prevent the slowdown from worsening despite ongoing weakness amongst the region’s key export markets, notably in Asia.

Even on this front, despite China facing medium-term structural issues, a string of recent fiscal and monetary stimulus measures should provide a cyclical lift to the country’s growth, in our opinion. Thus, the risk of further spillover to developed markets should diminish later this year. 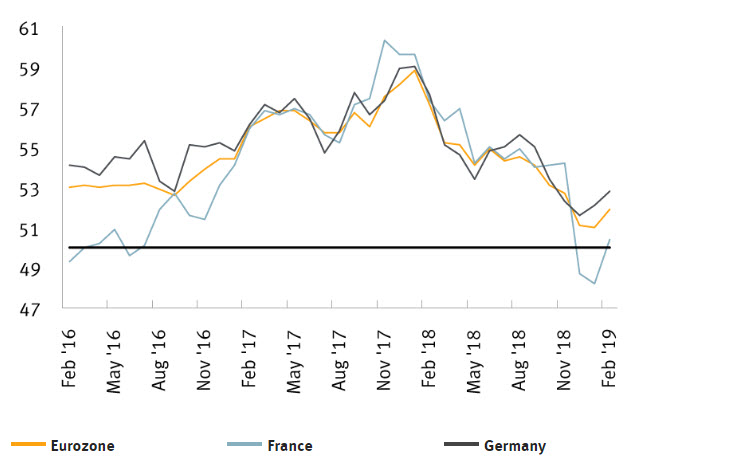 Risks still remain that the global economic expansion could falter further led by heightened political uncertainty. Ongoing trade negotiations come top of mind with the U.S.-China dispute yet to be resolved. There also remains the threat that the U.S. could announce tariffs on auto imports within 90 days following the submittal of the U.S. Commerce Department’s investigation of the effects of imports on national security to the White House on February 17. Meanwhile, the Brexit saga in the U.K. endures and a U.S. debt ceiling will need to be tackled, likely before this autumn.

However, signs are emerging that tensions could be easing somewhat. The extension of the March 1 trade deadline by the Trump administration—that would have seen tariffs rise sharply on Chinese imports—points to a potential deal in the offing. The truce could prove to be superficial with structural issues persisting, yet the development could provide some relief to investors’ global growth worries.

Across the pond, the risk of the U.K. leaving the EU without a deal in place declined materially recently. Prime Minister Theresa May conceded on Feb. 26 to opening the door to an extension of the March 29 exit date, allowing for mid-March votes in the U.K. Parliament that could rule out a “no-deal” scenario. Greater clarity on the outcome would help to lift the “fog of Brexit” that the Bank of England warned is weighing on domestic economic activity.

Market-implied odds of at least one policy rate increase by Dec 31, 2019 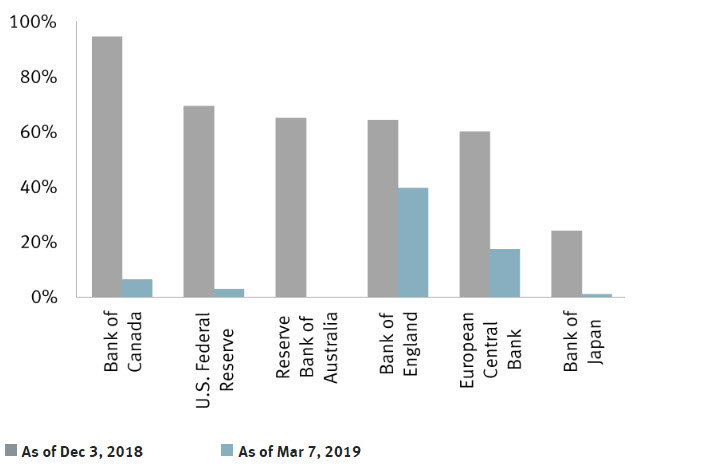 On account of the global growth slippage, central banks around the globe have mirrored the cautious stance of the Fed. As a result, financial markets have lowered expectations for tighter policy paths, in turn alleviating pent-up investor fears that a global growth downturn portends an end to the bull run in financial markets.

Storm clouds are likely to roll in at some point, in our view, yet the widespread embrace of data dependency by central banks should support global growth conditions. We remain Market Weight on global (total) equities, which equates to being invested up to the benchmark strategic allocation in portfolios.